Kids Encyclopedia Facts
Not to be confused with Alfalfa, Oklahoma.

Alfalfa County is a county located in the U.S. state of Oklahoma. As of the 2010 census, the population was 5,642. The county seat is Cherokee.

Alfalfa County was formed at statehood in 1907 from Woods County. The county is named after William H. "Alfalfa Bill" Murray, the president of the Oklahoma Constitutional Convention and ninth governor of Oklahoma. He was instrumental creating the county from the original, much larger Woods county.

Indigenous peoples inhabited and hunted in this area for thousands of years. By 1750, the Osage had become a dominant tribe in the area. About one third belonged to the band led by Chief Black Dog (Manka - Chonka). Before 1800 they made the Black Dog Trail starting east of Baxter Springs, Kansas and heading southwest to their summer hunting grounds at the Great Salt Plains in present-day Alfalfa County. The Osage stopped at the springs for its healing properties on their way to hunting at the plains, which attracted migratory birds and varieties of wildlife. The Osage name for this fork of the Arkansas River was Nescatunga (big salt water), what European-Americans later called the Salt Fork. The Osage cleared the trail of brush and large rocks, and made ramps at the fords. Wide enough for eight men riding horses abreast, the trail was the first improved road in Kansas and Oklahoma.

The treaties of 1828 and 1835 placed what would later become Alfalfa County within the Cherokee Outlet, which was owned by the Cherokee Nation. Ranching became the primary economic activity from 1870 to 1890 as cattle companies which were part of the Cherokee Strip Live Stock Association leased grazing land from the Cherokee. Prominent rancher, Major Andrew Drumm operated the "U Ranch" here as early as 1870. Its headquarters were southeast of Driftwood on the Medicine Lodge and Salt Fork rivers. 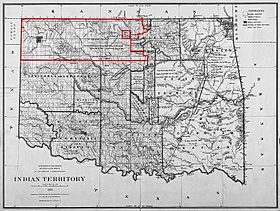 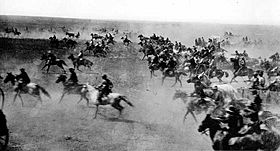 Alfalfa County was originally part of the much larger Woods County, which was created in September 1893 with the opening of the Cherokee Outlet with the Cherokee Strip Land Run. Alfalfa County itself was created in 1907, as part of statehood. The county was named after William H. "Alfalfa Bill" Murray, who served as the president of the Oklahoma Constitutional Convention and would later be elected as the ninth governor of Oklahoma.

The city of Cherokee, became the county seat through an election held in January 1909. Other towns receiving votes for the honor were Carmen, Ingersoll, and Jet.

Alfalfa County's population was primarily of European origins. European immigrants and their children were numerous in early 1900s. Germans from Russia (ethnic Germans who immigrated to American from Russia), many of whom were Mennonites, settled near Ingersoll, Driftwood, Cherokee, and Goltry. Early censuses also reveal a considerable number of Bohemians (also Germans). At the turn of the twenty-first century nearly 17 percent of county residents claimed German ancestry. One Mennonite church (in Goltry) remained as of 2006[update].

Early railroad construction, from the Choctaw Northern line (1901), the Kansas City, Mexico and Orient (1901), the Arkansas Valley and Western (1904), and the Denver, Enid and Gulf Railroad Company (1904), contributed greatly to the county's early prosperity and caused many small towns to flourish. They would compete as wheat-shipping points and agribusiness centers for many years thereafter. However, by 2000 only one rail line, the Burlington Northern Santa Fe, served the county.

Petroleum exploration and production has been an contributor to Alfalfa County's economy since the time of statehood. Agricultural pursuits, including wheat farming and livestock raising were major contributors to Alfalfa County's economy during the twentieth century. Small-scale agriculture in its early years made possible dozens of towns and dispersed rural communities, many of which no longer exist. Towns bypassed by rail service, such as Carroll, Carwile, Keith, and Timberlake, did not long prosper. Others, Ingersoll and Driftwood for example, remained incorporated for decades, but after the abandoning of their rail lines, saw a declining population which made it difficult to sustain educational and city services. Ingersoll (founded 1901) peaked in 1910 with 253 inhabitants and Driftwood (founded 1898) in 1930 with 71. By 1980, neither of these towns were still incorporated. Aline, Amorita, Burlington, Byron, Carmen, Cherokee, Goltry, Helena, Jet, and Lambert remained incorporated as of 2000. 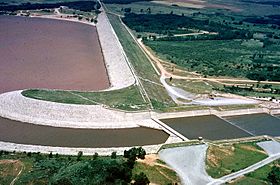 Aerial view to the northwest of the Great Salt Plains Lake Dam on the Salt Fork of the Arkansas River in Alfalfa County, OK. The dam was constructed by the U.S. Army Corps of Engineers.

It is part of the Red Bed plains.

The following sites in Alfalfa County are listed on the National Register of Historic Places:

The largely rural economy is based on agricultural and energy production. Agriculture has altered to be based in industrial-scale farms and production. The county is the second-largest producer of winter wheat in Oklahoma. The USDA estimated the county's winter wheat production at 5,957,000 bushels for 2015. The USDA also listed the county as the state's seventh-largest producer of sorghum in 2015, at 702,000 bushels.

Alfalfa County remains a major producer of petroleum and natural gas. In 2012, it was second (surpassed only by neighboring Woods County) in production of natural gas for Oklahoma counties, with an output of 419,606,514 Mcf (thousand cubic feet). It is also a major producer of crude oil, with total output of 3,395,396 barrels in 2012, which was fifth among Oklahoma counties.

All content from Kiddle encyclopedia articles (including the article images and facts) can be freely used under Attribution-ShareAlike license, unless stated otherwise. Cite this article:
Alfalfa County, Oklahoma Facts for Kids. Kiddle Encyclopedia.