Harper County (county code HP) is a county located in the U.S. state of Kansas. As of the 2020 census, the county population was 5,485. Its county seat and most populous city is Anthony. The county was named for Sergeant Marion Harper of the 2nd Kansas Cavalry, who died of wounds suffered near Waldron, Arkansas, in December 1863.

The original organization of Harper County was one of the largest frauds in county government. In 1873, a group of three men organized Harper County, designating the then fictitious city of "Bluff City" as the county seat. The petition for organization used several names out of a Cincinnati city directory to represent as residents of Harper County. In 1874, the state attorney general investigated, and found not a single resident of the county. The "founders" of the county had sold $40,000 worth of bonds.

Harper County was settled starting in 1877, and the county was organized for a second time in 1878 by the Glenn and Robinson families. Since Bluff City could not be shown to have existed, Anthony was designated as the temporary county seat. In an election in 1879, Anthony won as county seat even though 2,960 votes were cast in a county with 800 legal voters.

Due to new and high-paying jobs at area oil fields and wind farms, Harper County experienced an economic boom; as of 2012, rental housing and office space in towns such as Danville, Harper, and Anthony had more than quadrupled in price, in properties ranging from double-wide trailers to a Carnegie library. However, by 2016, the oil fracking boom had largely played out and the economies of Harper and adjacent counties suffered under the impact. Earthquakes, due to induced seismicity from injection wells, had also substantially reduced in frequency and intensity, thanks to a Kansas Corporation Commission order mandating cutbacks in volumes and pressures. SandRidge Energy, which along with Chesapeake Energy was one of the two major producers in Harper county, appealed the order, but soon went into bankruptcy. 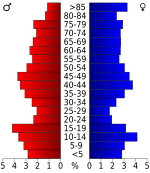 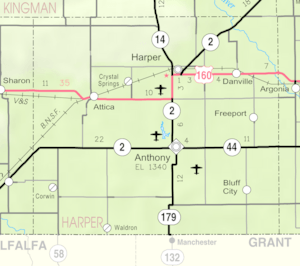 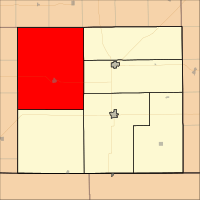 The townships of Harper County (Townships are numbers in counter-clockwise order, with Township 1 highlighted in red).

Harper County is divided into six townships. The cities of Anthony and Harper are considered governmentally independent and are excluded from the census figures for the townships. In the following table, the population center is the largest city (or cities) included in that township's population total, if it is of a significant size.

Harper County is one of only four counties in Kansas that have numbered, not named, townships. The other three are Morris County, Pratt County, and Rooks County.

All content from Kiddle encyclopedia articles (including the article images and facts) can be freely used under Attribution-ShareAlike license, unless stated otherwise. Cite this article:
Harper County, Kansas Facts for Kids. Kiddle Encyclopedia.