Sumner County (standard abbreviation: SU) is a county located in the U.S. state of Kansas. As of the 2010 census, the population was 24,132. Its county seat is Wellington. 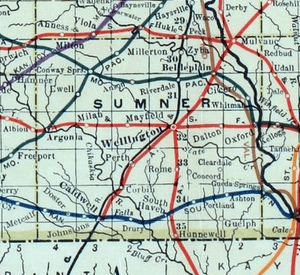 On February 26, 1867, Sumner County was created from parts of Marion County and Butler County. It was named in honor of Charles Sumner, a U.S. Senator from Massachusetts (1811–74), who was a strong advocate of Kansas becoming a free state.

In December 2011, the Kansas Star Casino opened approximately 4.5 miles (7.2 km) west of the center of Mulvane, adjacent to an exit on the Kansas Turnpike that was added in the mid 1980s. The casino is located a couple blocks west of the turnpike exit. 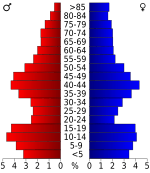 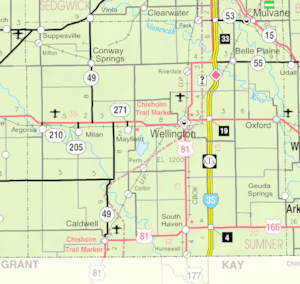 Sumner County is divided into thirty townships. The cities of Caldwell and Wellington are considered governmentally independent and are excluded from the census figures for the townships. In the following table, the population center is the largest city (or cities) included in that township's population total, if it is of a significant size.

All content from Kiddle encyclopedia articles (including the article images and facts) can be freely used under Attribution-ShareAlike license, unless stated otherwise. Cite this article:
Sumner County, Kansas Facts for Kids. Kiddle Encyclopedia.