Cowley County (county code CL) is a county located in the U.S. state of Kansas. As of the 2020 census, the county population was 34,549. Its county seat is Winfield, and its most populous city is Arkansas City.

For millennia, the land now known as Kansas was inhabited by Native Americans. It was visited by the explorer DeSoto in 1537, In 1803, most of modern Kansas was secured by the United States as part of the Louisiana Purchase. In 1854, the Kansas Territory was organized, then in 1861 Kansas became the 34th U.S. state.

Cowley County was officially organized as a county, but reserved for the Osage Indians, by the Kansas Legislature in March 1867, originally named Hunter County for Robert Mercer Taliaferro Hunter (1809–1887), a Virginia Representative and Senator to Congress and Speaker of the House in the twenty-sixth Congress. In 1870, the county was renamed for Matthew Cowley, First Lieutenant in Company I, 9th Kansas Cavalry, who died at Little Rock, Arkansas, on October 7, 1864. Officially opened for settlement July 15, 1870, there was a lengthy and bitter disagreement between the towns of Winfield and Cresswell (the town now named Arkansas City) over the possession of the county seat of government. Finally settled after two special elections and numerous petitions to the Governor and Legislature, Winfield was determined to be the county seat and a courthouse was constructed in 1873 at a cost of $11,500.

In 2010, the Keystone-Cushing Pipeline (Phase II) was constructed north to south through Cowley County. Controversy arose from the Kansas legislature's decision to grant the pipeline a ten-year exemption from property taxes; it was estimated that this would mean $15 million per year in lost revenue to the six counties through which the pipeline passed. The counties were unsuccessful in an attempt to eliminate the exemption. 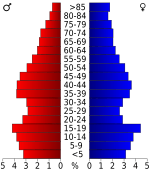 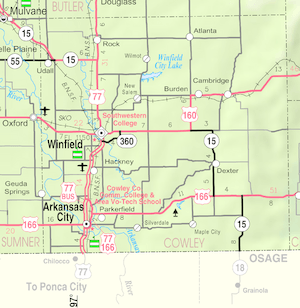 Cowley County is divided into twenty-five townships. The cities of Arkansas City and Winfield are considered governmentally independent and are excluded from the census figures for the townships. In the following table, the population center is the largest city (or cities) included in that township's population total, if it is of a significant size.

Robert Docking was a successful banker and mayor of Arkansas City before he became the 38th Governor of Kansas.

Several college football head coaches have passed through Winfield that have gone on to become widely recognized. Jerry Kill is the current head coach for the Minnesota Golden Gophers—he played for the Southwestern Moundbuilders under Dennis Franchione when he was head coach. Jack Mitchell went on to coach several schools including the Kansas Jayhawks. Former head coach and for the Oklahoma Sooners and College Football Hall of Fame member Bennie Owen was born in Arkansas City.

Perhaps the most famous resident of Cowley County is the fictional character Mary Ann Summers from the television show Gilligan's Island. It is said on the show that she is "employed at the Winfield General Store."

All content from Kiddle encyclopedia articles (including the article images and facts) can be freely used under Attribution-ShareAlike license, unless stated otherwise. Cite this article:
Cowley County, Kansas Facts for Kids. Kiddle Encyclopedia.