Osage County is the largest county by area in the state of Oklahoma in the United States. Created in 1907 when Oklahoma was admitted as a state, the county is named for and is home to the federally recognized Osage Nation. The county is contiguous with the Osage Nation Reservation, established by treaty in the 19th century when the Osage relocated here from Kansas. The county seat is in Pawhuska, Oklahoma, one of the first three towns established in the county. The total population of the county is 47,987.

By the 19th century, the Osage and other Siouan tribes had been forced to move west from the Ohio Valley across the Mississippi River. The Osage became established as a powerful nation in the areas of present-day Missouri and Arkansas between the Missouri and Red rivers, as well as extending to the west. By 1760, they had increased their range to include the present Osage County. Historically one of the most powerful Great Plains tribes, their numbers were reduced by infectious disease and warfare after encounter with Europeans.

In 1825, they ceded their claim to the land in present-day Oklahoma to the United States government, which included it in a "perpetual outlet to the west given to the Cherokee Nation by the Treaty of New Echota" in 1835. This treaty was to accomplish Cherokee removal to the Indian Territory. During the American Civil War, on December 26, 1861, a band of pro-Union Creek and Seminole fought with a Confederate Army unit at the Battle of Chustenahlah on Bird Creek, near the present town of Skiatook. Generally the Five Civilized Tribes were allied with the Confederacy.

In 1870, the Osage finally prepared for removal from Kansas, after having negotiated payment for their land. They purchased 1.57 million acres (6,400 km2) of their former territory in present-day Oklahoma from the Cherokee. By owning it by title, they had a stronger position in relation to the US government than did other tribes. The Osage Agency was established in 1872 at Deep Ford, later renamed as Pawhuska. It was designated as the county seat when Oklahoma was admitted as a state. The other chief settlements in the 1870s were Hominy and Fairfax; each of the three was settled by a major Osage band.

In 1875 the US designated their land as the Osage Reservation. Because the tribe owned the land directly, they retained more control over their affairs than did tribes whose land was held "in trust" by the United States government. This reservation became part of the Oklahoma Territory under the Oklahoma Organic Act of 1890. It became a semi-autonomous district by the Oklahoma Enabling Act of 1906, and Osage County at the time of Oklahoma Statehood in 1907. At that time, there were 2,229 registered Osage members.

As owners, the Osage negotiated the retention of the communal mineral rights to their reservation lands. In October 1897, the Phoenix Oil Company drilled the first successful oil well on the Osage reservation and in Oklahoma Territory. It was located along Butler Creek. In 1901, Phoenix Oil and Osage Oil companies combined their assets to form the Indian Territory Illuminating Oil Company (ITIO). It arranged with the Bureau of Indian Affairs to sub-lease the eastern part of the Osage reservation until 1916. When ITIO's lease expired, the United States government supervised the public auctioning of leases for 160-acre (65 ha) tracts.

All subsurface minerals, including oil, are owned by the Osage Nation and held in trust for them by the Federal Government. Each mineral lease was negotiated by the Osage National Council and approved by the U. S. Secretary of the Interior. While the government forced allotment of lands and distribution of 160-acre (65 ha) plots to tribal members for farming in the early 20th century, the tribe continued to hold their "surplus" land after the distribution. Other tribes were forced to give up such "surplus" and allow for sales to non-Indians. The Osage distributed their surplus communal land to tribal members, so that in 1906 each Osage was given a total of 657 acres (266 ha), nearly four times the amount that other Indian households received in the allotment process. Later the enrolled Osage and their descendants received oil and other mineral royalties as payments based on these "headrights".

By 1920, the Osage were receiving lucrative revenues from royalties and were counted as the richest people in the country. During the 1920s, Osage County was the site of the infamous Osage Indian murders. Because of the great wealth being generated by oil, an estimated 60 tribal members were killed as whites tried to gain their headrights, royalties or land. The FBI believed that several white husbands of Osage women had committed or ordered murders of their wives. Other Osage were tricked out of their legal rights by unscrupulous white opportunists. Congress had passed a law in 1921 requiring all Osage of half or more Indian ancestry to have a guardian appointed by the court until the person proved to be "competent." Guardians were appointed by the courts even for minors with living parents. There was extensive corruption as such guardians manipulated people to give or bequeath land to them in order to get access to oil rights.

The Osage called in the FBI to help solve several murders in the Kyle family. Three white men were ultimately convicted and sentenced. But, many murders were never solved. To try to protect the Osage, Congress passed a law in 1925 limiting the inheritance of headrights only to persons who were half or more Osage in ancestry. 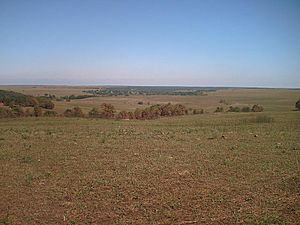 A view of Tallgrass Prairie Preserve in Osage County, Oklahoma

According to the U.S. Census Bureau, the county has a total area of 2,304 square miles (5,970 km2), of which 2,246 square miles (5,820 km2) is land and 58 square miles (150 km2) (2.5%) is water. It is the largest county in Oklahoma by area. Most of the county is in the Osage Plains, and consists of open prairie. The eastern part of the county contains the Osage Hills, an extension of the Flint Hills in Kansas. Tallgrass Prairie Preserve is north of Pawhuska.

Holmes Peak is a mountain northwest of Tulsa in Osage County. It was named by the United States Board on Geographic Names on October 5, 1983 for the fictional detective, Sherlock Holmes. The name was proposed by Richard S. Warner. Holmes Peak is the highest point in the Tulsa Metropolitan area, with an elevation of 1,030 feet (310 m), though it ranks only as the 379th highest point in the state.

Gray Horse Creek, Drum Creek and Salt Creek all drain the southwestern part of the county and flow into the Arkansas River, which is part of the county's southern and western boundaries. Eastern Osage County drains into Caney River, Bird Creek, Hominy Creek, and Delaware Creek. All of these streams flow into the Verdigris River.

Lakes and reservoirs in the county include:

In 2012, the Osage Nation took over management of Wah-Sha-She State Park, which includes Hulah Lake, after state budget cuts would have closed it. Hunting is allowed there. The land is owned by the US Army Corps of Engineers, which developed the lake. The tribe's agreement with the COE runs through 2016, before which it will assess the operation.

There were 18,205 households, out of which 32.6% included children under the age of 18, 54.2% were married couples living together, 12% had a female householder with no husband present, 5.1% had a male householder with no wife present,and 28.7% were non-families. Individuals living alone accounted for 24.8% of households and 10.8% had someone living alone who was 65 years of age or older. The average household size was 2.53 and the average family size was 2.99.

The following sites in Osage County are listed on the National Register of Historic Places:

It is the setting of Oklahoma native Tracy Letts' play August: Osage County (2007), which won the Pulitzer Prize for Drama and a Tony Award in 2008, and the 2013 movie adaptation of the same name which stars Meryl Streep. Filming took place in rural Osage County, including Pawhuska, Barnsdall and Bartlesville.

All content from Kiddle encyclopedia articles (including the article images and facts) can be freely used under Attribution-ShareAlike license, unless stated otherwise. Cite this article:
Osage County, Oklahoma Facts for Kids. Kiddle Encyclopedia.