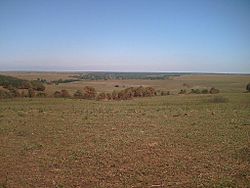 The Tallgrass Prairie Preserve in the western Osage Hills.

The Osage Hills is a hilly area in Oklahoma, commonly known as The Osage. The name refers to the broad rolling hills and rolling tallgrass prairie and Cross Timbers in Osage County, Oklahoma.

All content from Kiddle encyclopedia articles (including the article images and facts) can be freely used under Attribution-ShareAlike license, unless stated otherwise. Cite this article:
Osage Hills Facts for Kids. Kiddle Encyclopedia.