Keystone Lake is a reservoir in northeastern Oklahoma on the Arkansas and Cimarron rivers. It is located upstream about 23 miles (37 km) from Tulsa. It was created in 1968 when the Keystone Dam was completed. The primary purposes are: flood control, hydroelectric power generation, wildlife management and recreation.

Keystone Lake is about 23,600 acres (96 km2) in area, and was designed to contain 505,381 acre feet (623,378,000 m3) of water. It was named for the community of Keystone, which existed on the site from 1900 until 1962, when it was inundated by the waters of the lake. Construction of the lake forced the relocation of three other towns: Mannford, Oklahoma, Prue, (also known as New Prue), and Appalachia, Oklahoma. The town of Osage was partially abandoned to the lake, while the rest clings to the south shore. Engineers built a levee around low-lying areas of the south and east sides of Cleveland, Oklahoma to prevent flooding of that city. The shoreline extends for 330 miles (530 km).

The Keystone Lake project was authorized by the Flood Control Act of 1950. It was designed and built by the Tulsa District, Army Corps of Engineers. Construction began in January 1957 and was complete for flood control purposes in September 1964. Commercial operation of the power generating facility began in May 1968.

A reregulating dam, located 7.8 miles (12.6 km) downstream of the main dam, was also completed in 1968. Cost of the total project was approximately $123 million. In 1986, the reregulating dam was removed due to public safety issues, as 16 people had drowned at the dam.

The dam was actually constructed across the Arkansas River, downstream of the confluence with the Cimmaron River. It is built of rolled earthfill material. Maximum height of the dam is 121 feet (37 m) above the stream bed. The total length of the dam is 4,600 feet (1,400 m), including a 1,600 feet (490 m)-long concrete section. The spillway in the concrete section is 856 feet (261 m) wide. The non-overflow part of the concrete section includes a power intake structure. State Highway 151 crosses the dam, connecting State Highway 51 on the south with U.S. Highway 64 on the north.

The power intake structure is between the spillway and the left non-overflow section of the dam. It includes two penstocks, each 27 feet (8.2 m) diameter and controlled by two 14 by 30 feet (4.3 by 9.1 m) gates. The power generation facility includes two hydroelectric generators, each rated at 35,000 kW (47,000 hp).

In September and October 1986, Keystone Lake was filled to capacity when the remnants of Hurricane Paine entered Oklahoma and dropped nearly 22 inches (0.56 m) of water into the Cimmaron and Arkansas rivers northwest of the lake, requiring the Corps of Engineers to release water downstream at a rate of 310,000 cubic feet per second (8,800 m3/s), which made downstream flooding inevitable. As a result, a private levee in West Tulsa failed, causing more than $1.3 million in damages. 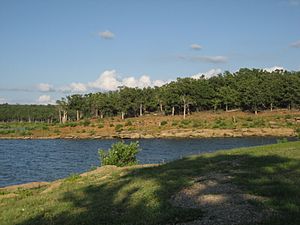 All content from Kiddle encyclopedia articles (including the article images and facts) can be freely used under Attribution-ShareAlike license, unless stated otherwise. Cite this article:
Keystone Lake Facts for Kids. Kiddle Encyclopedia.