Creek County is a county located in the U.S. state of Oklahoma. As of the 2010 census, the population was 69,967. Its county seat is Sapulpa.

European explorers traveled through this area early in the 19th Century, after the Louisiana Purchase. In 1825, the Osage Nation ceded the territory where the Federal Government planned to resettle the Creek Nation and other tribes after their expulsion from the Southeastern part of the United States. The Creeks began migrating into this area, where they and their black slaves settled to begin farming and raising cattle. In 1835, Federal soldiers under Captain J. L. Dawson built the Dawson Road, following an old Osage hunting trail.

Railroads gave an important boost to the local economy. In 1886, the Atlantic and Pacific Railroad built a line from Red Fork to Sapulpa. In 1898, the St. Louis and Oklahoma City Railway connected Sapulpa and Oklahoma City.

The present Creek County was established at the time of statehood, with a population of 18,365. The town of Sapulpa was initially designated as the county seat. This decision was challenged by supporters of the town of Bristow. An election held August 12, 1908 to choose a permanent seat was won by Sapulpa, but the dispute did not end there. After a series of court cases, the Oklahoma Supreme Court ruled in favor of Sapulpa on August 1, 1913.

After oil was discovered at Glenn Pool in adjacent Tulsa County in 1905, other strikes occurred in Creek County. The Cushing-Drumright Oil Field opened in 1912, creating boom towns Drumright, Kiefer and Oilton. By 1920, the county population had increased to 62,480. 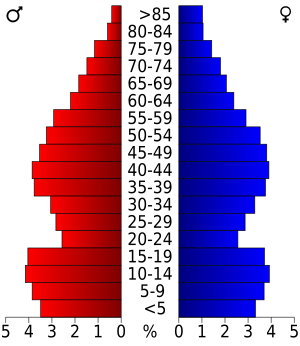 Age pyramid for Creek County, Oklahoma, based on census 2000 data.

All content from Kiddle encyclopedia articles (including the article images and facts) can be freely used under Attribution-ShareAlike license, unless stated otherwise. Cite this article:
Creek County, Oklahoma Facts for Kids. Kiddle Encyclopedia.