Payne County is located in the U.S. state of Oklahoma. As of the 2010 census, the population was 77,350. Its county seat is Stillwater. The county was created in 1890 as part of Oklahoma Territory and is named for Capt. David L. Payne, a leader of the "Boomers".

This county was established and named as the Sixth County by the Oklahoma Organic Act of 1890. It included land settled during the Land Run of 1889. The Organic Act settled a dispute between the towns of Stillwater and Perkins over which should be the county seat.

Eastern Oklahoma Railway built two lines in Payne County between 1900 and 1902, then immediately leased them to the Atchison, Topeka and Santa Fe Railway.

In 2010, the Keystone-Cushing Pipeline (Phase II) was constructed into Payne County.

Payne County is covered by rolling plains, mostly within the Sandstone Hills physiographic region, but with the western part of the county in the Red Bed plains. The county has two significant reservoirs: McMurtry Lake and Carl Blackwell Lake. The Cimarron River and Stillwater Creek drain most of the county.

The following sites in Payne County are listed on the National Register of Historic Places:

Agriculture was the basis of the county economy for more than fifty years. The primary crops were cotton, corn and wheat.

World War II caused hundreds of students at Oklahoma A & M to leave school for military service. To offset this loss to the local economy, civic and college leaders lobbied military officials and Oklahoma Senator Mike Monroney to have the school designated as a war training center. This resulted in the establishment of twelve training programs for the Navy, with nearly 40,000 people. The wartime experience showed local political leaders that it would be essential to diversify the county's economic base. They formed an Industrial Foundation to attract manufacturing plants and industrial jobs. This effort succeeded and accelerated an increase in population. 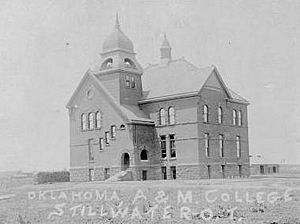 All content from Kiddle encyclopedia articles (including the article images and facts) can be freely used under Attribution-ShareAlike license, unless stated otherwise. Cite this article:
Payne County, Oklahoma Facts for Kids. Kiddle Encyclopedia.