Drumright is a city in Creek and Payne counties in the U.S. state of Oklahoma. It began as an oil boom town. However, the population has declined as oil production has waned in the area. The population was 2,907 at the 2010 census, a figure almost unchanged from 2,905 in 2000. Drumright and nearby Cushing were at the center of the large, productive Cushing-Drumright Oil Field in the 1910s and 1920s. Now Drumright is home to a festival called The Drumright Monthly Market, where hundreds of visitors come, seeking crafts and delicacies from all over the region. First Saturday of every month. 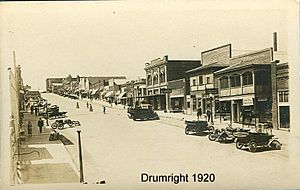 The town sprang up nearly overnight in 1912, after wildcatter Tom Slick struck oil on the farm of Frank Wheeler, causing a rush of speculators, oilfield workers, and merchants into the area. A post office was established in the community on December 28, 1912. Local landowners James W. Fulkerson and Aaron Drumright platted a townsite, which was initially called Fulkerson, The town was renamed for Aaron Drumright, a farmer and later local businessman whose farm was part of the townsite.

Oil workers flooded into town so quickly that they lived in tents or shacks made from box cars, causing the community to be known locally as "Ragtown." Hotels and boarding houses were constructed next, as well as amenities like gambling dens, dance halls, and roadhouses, where the workers could spend their money. Drumright incorporated as a town on May 27, 1913. In 1914, the city built a two-story building of stone to serve as an elementary and high school. It was called Washington School, and is listed on the National Register of Historic Places (NRIS 81000462). Two banks opened in the town during 1914. Drumright was designated a first-class city after an election on April 18, 1916. The 1920 census reported a population of 6,460.

In 1919 a riot broke out in Drumright during a strike by telephone workers. The town's mayor and chief of police were locked in the town jail by rioters. The Governor of Oklahoma sent six militia units to town to restore order.

Beginning with the Depression of the 1930s, the town declined as oil production waned, and a large refinery at the edge of town closed in the 1950s.

Tornadoes have caused loss of life and property damage in Drumright on at least two occasions: on April 2, 1956, when five people were killed and several homes, a school, and the public library were damaged; and on June 8, 1974, when 12 people were killed, a nursing home was destroyed, and about 100 homes were damaged or destroyed.

Today, oil, gas, education, medicine and agriculture are the largest local industries. Drumright is home to an area vocational and technical school, Central Technology Center, which opened August 22, 1970, and employs about 125 people. Drumright is also home to the Drumright Regional Hospital. A tourist attraction is the Tidewater Winery that opened in a historic building that once served as a school for the children of refinery workers.

Central Tech, the marketing name for the Central Technology Center, previously Central Vo-Tech, is an affiliate of Oklahoma CareerTech, the state’s system of career and technology education. Central Tech offers full-time and short-term classes in a large variety of fields.

All content from Kiddle encyclopedia articles (including the article images and facts) can be freely used under Attribution-ShareAlike license, unless stated otherwise. Cite this article:
Drumright, Oklahoma Facts for Kids. Kiddle Encyclopedia.