The city was established after the Land Run of 1891 by William "Billy Rae" Little. It was named for Marshall Cushing, private secretary to U.S. Postmaster General John Wanamaker. An oil boom that began in 1912 led to the city's development as a refining center.

Today, Cushing is a major trading hub for crude oil and a famous price settlement point for West Texas Intermediate on the New York Mercantile Exchange.

The area that would become Cushing was part of the Sac and Fox Reservation. With the Land Run of 1891, a former government trader for the tribe, Billy Rae Little, built a house, established his claim, and laid out town lots. The town got a post office on November 10, 1891 and was named for Marshall Cushing, private secretary to U.S. Postmaster General John Wanamaker.

In 1902, the Eastern Oklahoma Railway line to Cushing was built. The Missouri, Kansas and Texas Railway added service on its own line built in 1903.

Wildcatter Thomas B. Slick started an oil boom on March 17, 1912 when he brought in a gusher east of the town. Other wells were soon drilled nearby, and the oil field became known as the Cushing-Drumright Oil Field. The city became a center for exploration of and production from nearby oil fields and also a refining center, when Consumers Oil Company opened a refinery in 1913. Production centered on the new town of Drumright, and Cushing became a refining center. Eventually, 23 oil companies and five oil-field supply houses located in the town, and more than 50 refineries once operated in the Cushing area. Pipelines and storage facilities have since made it “the pipeline crossroads of the world.

The oil boom did not last long. Annual production peaked in 1915 with 8.3 million barrels of oil, but production declined by fifty percent in 1916.

During the 1970s and 1980s refining operations continued in Cushing until the last two refineries, Kerr-McGee and Hudson, closed. Rail service ended in 1982. As the oil fields started to run dry, starting in the 1940s, production and refining became less important.

However the town retained a great asset in the Shell pipeline terminal, with thirty-nine storage tanks and pipelines that could move as much as 1.5 million barrels a day. This enhanced Cushing's status as "Pipeline Crossroads of the World."

The maze of pipelines and tanks that had been built led to the NYMEX choosing Cushing as the official delivery point for its light sweet crude futures contract in 1983.

There were 3,071 households out of which 29.9% had children under the age of 18 living with them, 48.7% were married couples living together, 12.4% had a female householder with no husband present, and 34.8% were non-families. 31.3% of all households were made up of individuals and 16.1% had someone living alone who was 65 years of age or older. The average household size was 2.39 and the average family size was 2.99. 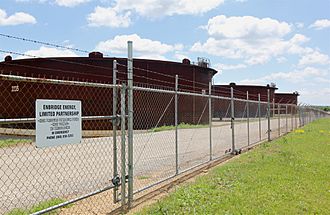 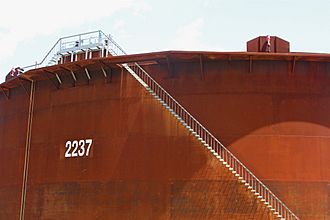 Cushing is a "vital transshipment point with many intersecting pipelines, storage facilities and easy access to refiners and suppliers." Crude oil flows "inbound to Cushing from all directions and outbound through dozens of pipelines." In 2005, crude oil and refined products in the U.S. were almost always transported by interconnected pipeline systems. In Oklahoma, eight private companies operated almost all the pipelines and frequently operated oil terminals and refineries: Enbridge; Enterprise Products; Explorer Pipeline; Jayhawk; Magellan Midstream Partners; Plains All American Pipeline; Sunoco; and Valero Energy.

There is approximately 85 million barrels of crude oil storage tanks around Cushing. On October 28, 2016, tanks held a total of 58.5 milion barrels of oil.

A partial list of tank farm owners at Cushing are:

A partial list of pipelines with connections at Cushing are:

Cushing is the delivery point for West Texas Intermediate, a blend of US light sweet crude oil streams. traded on the New York Mercantile Exchange

Cushing's strategic position as a major hub in oil supply led to WTI’s development as a significant physical market price reference or benchmark for over three decades.

In 2005 Cushing was described as the most significant trading hub for crude oil in North America, connecting the Gulf Coast suppliers with northern consumers.

In 2006, with production increases from Canadian oil sands, one pipeline reversed direction, bringing crude into the Cushing Hub, rather than delivering crude from Cushing to oil refineries.

By 2007 Cushing held 5 to 10 percent of the total U.S. crude inventory. Signs made of a pipe and valve on the major highways near town proclaim Cushing to be the "Pipeline Crossroads of the World", and the town is surrounded by several tank farms.

Oil futures designated delivery point in the US

On April 13, 2007, the now-defunct Lehman Brothers released a study which claimed that West Texas Intermediate (WTI) Crude at Cushing is no longer an accurate gauge of world oil prices. By May 2007, Cushing's inventory fell by nearly 35% as the oil-storage trade heated up.

Oil giant BP, and energy-transport and logistics firms Enbridge Energy Partners (an affiliate of Canada's Enbridge), Plains All American Pipeline and SemGroup owned most of the oil storage tanks in Cushing in October 2007.

Oil storage became big business in 2008 and 2009, when the supply glut in the oil market led to situation where oil futures were higher priced than their spot price. Many participants—including Wall Street giants, such as Morgan Stanley, Goldman Sachs, and Citicorp—turned sizeable profits simply by sitting on tanks of oil. Institutional investors bet on the future of oil prices through a financial instrument known as oil futures, in which investors contractually agree to buy or sell oil at a set date in the future. Investors can choose to take profits or losses prior to the oil-delivery date. Alternatively, they can leave the contract in place and take physical delivery of the oil at an "officially designated delivery point" in the United States; this delivery point is usually Cushing.

On July 13, 2010, BP announced it will sell its assets in Cushing to Magellan Midstream Partners.

The bottleneck at Cushing's giant storage hub distorted benchmark U.S. oil prices for many years. In 2007 a large stockpile of oil at the facility was caused largely because Valero Energy Corp.'s McKee refinery near Sunray, Texas, was shut down. With the refinery closed, crude oil prices were artificially depressed at the Cushing pricing point. The Eagle North pipeline reactivated in 2010, added offtake capacity to Cushing by connecting Valero's oil refinery in Ardmore, Oklahoma with Cushing's cheap crude oil. This should have resulted in boosting WTI prices which were discounted against Brent crude oil because of the glut.

In October 2014 two moderate-sized earthquakes (Mw 4.0 and 4.3) struck south of Cushing, below one of the largest crude oil storage facility and gas pipeline transportation in the world. The system also includes operational sections of the Keystone pipeline.

On 6 November 2016, around 7:44 pm, a 5.0 Mw earthquake rattled north-central Oklahoma. The quake was centered one mile west of Cushing. It was the sixth 5.0 magnitude or higher to strike the state since 1882. Three of those larger quakes occurred in 2016, and the strongest ever recorded in Oklahoma was a 5.8 magnitude that hit Pawnee (25 miles from Cushing) in September.

According to George Choy, a geophysicist with the U.S. Geological Survey, Oklahoma has had a severe spike in earthquakes of 3.0 magnitude or higher since 2008. The number of 3.0 magnitude quakes rose from 2 in 2008 to 889 in 2015, according to USGS statistics. In 2016, there have been 572 (up to November). "The oil companies have said for a long time that these are natural earthquakes, that they would have occurred anyway," Choy said, "but when you look at the statistics, that argument does not fly."

Analysis of the spatial distribution of earthquakes and regional moment tensor focal mechanisms indicated reactivation of a subsurface unmapped strike-slip fault. The discovery stoked fears among scientists about other unknown faults that could be triggered by oil and gas wastewater being injected deep underground. Coulomb failure stress change calculations indicated that the Wilzetta Fault zone south of Cushing could produce a large, damaging earthquake comparable to the 2011 Prague event.

Much of the production, using new horizontal drilling techniques, produces at very high rates and with very high water to oil ratios. Thus many of the disposal wells, which reinject the water into underground formations, handle much more water at much higher pressures than is common in other, often older plays. It is believed that when high volume, high pressure water follows the planes in dormant faults, it causes them to slip resulting in quakes. After the strongest earthquake in the state's history, concerns about the relationship between disposal wells and earthquakes made state and federal regulators shut down more than 50 disposal sites and wells across Oklahoma in 2016 considering they were too near the newly discovered fault line.

All content from Kiddle encyclopedia articles (including the article images and facts) can be freely used under Attribution-ShareAlike license, unless stated otherwise. Cite this article:
Cushing, Oklahoma Facts for Kids. Kiddle Encyclopedia.