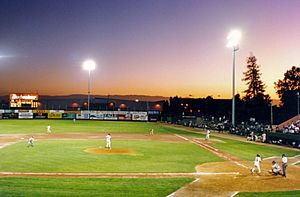 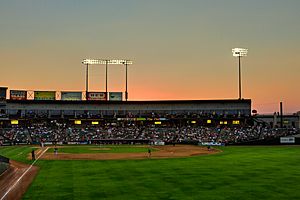 The third base stands of the Dell Diamond, home of the Round Rock Express. 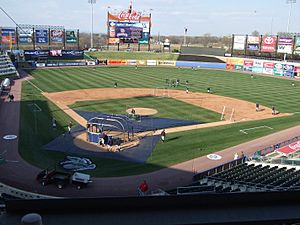 Coca-Cola Park in Allentown, Pennsylvania, home of the Lehigh Valley IronPigs, the Triple-A affiliate of the Philadelphia Phillies

Minor_League_Baseball_Front_Office.jpg|thumb|300px|Minor League Baseball Headquarters, St. Petersburg, Florida Minor league baseball is a level of professional baseball in North America. It is made up a many different teams which play in many leagues and levels of ability. Minor league teams are used by Major League teams to have a place to put their players who they do not feel are good enough to play in the Major League yet.

There are several different levels of ability in the Minor Leagues, these levels are (in order from lowest to highest):

When a normal player is first drafted or signed by a major league team, he is usually placed in "Rookie" League or short season A, however top prospects often start higher. If a player plays good in his league he can be "called up" to the next league. If a player does not play well he may be sent back down or cut from the team. This continues until a player gets to the major leagues, although most players never make it that far. This way players are able to get better at baseball before having to play against tougher opponents.

Sometimes, Major League players who are have been hurt will play a few games in the minor leagues before playing in the Major Leagues again, in order to see if they feel good enough to start playing again.

There are also other professional baseball leagues that Major League teams do not use to as a place put their players. These are known as "Independent Leagues". In these leagues players do not go to higher or lower levels of ability.

All content from Kiddle encyclopedia articles (including the article images and facts) can be freely used under Attribution-ShareAlike license, unless stated otherwise. Cite this article:
Minor league baseball Facts for Kids. Kiddle Encyclopedia.