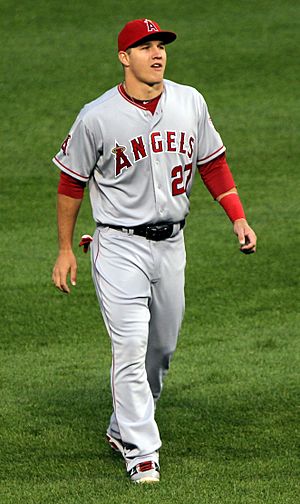 Michael Nelson Trout (born August 7, 1991) is a center fielder for the Los Angeles Angels of Major League Baseball. He has played for the Angels since he joined the major leagues in 2011. He was the Rookie of the Year in 2012, and the Most Valuable Player in the American League in 2014, 2016 and 2019. Trout has been an All-Star six times.

All content from Kiddle encyclopedia articles (including the article images and facts) can be freely used under Attribution-ShareAlike license, unless stated otherwise. Cite this article:
Mike Trout Facts for Kids. Kiddle Encyclopedia.