Run batted in facts for kids 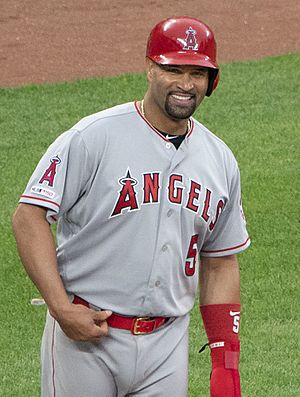 Albert Pujols is the most recent player to record 2000 runs batted in during his Major League Baseball career.

Runs batted in or RBI is a statistic used in baseball and softball to credit a batter when the outcome of his at bat results in a run being scored, except in certain situations such as when an error is made on the play.

The official rulebook of Major League Baseball states in Rule 10.04:

(a) The official scorer shall credit the batter with a run batted in for every run that scores:

(1) unaided by an error and as part of a play begun by the batter's safe hit (including the batter's home run), sacrifice bunt, sacrifice fly, infield out or fielder's choice, unless Rule 10.04(b) applies;
(2) by reason of the batter becoming a runner with the bases full (because of a base on balls, an award of first base for being touched by a pitched ball or for interference or obstruction); or
(3) when, before two are out, an error is made on a play on which a runner from third base ordinarily would score.

(b) The official scorer shall not credit a run batted in

All content from Kiddle encyclopedia articles (including the article images and facts) can be freely used under Attribution-ShareAlike license, unless stated otherwise. Cite this article:
Run batted in Facts for Kids. Kiddle Encyclopedia.