Stolen base facts for kids 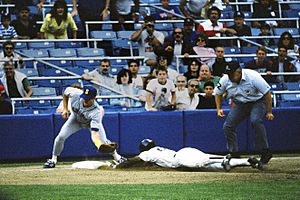 The all-time stolen base leader, Rickey Henderson, steals third base in 1988.

In baseball, a stolen base is when a baserunner advances to the next base while the pitcher is throwing the ball to home plate. In baseball statistics, stolen bases are displayed as SB. It is possible to steal second base, third base, or home plate, but not to steal first base.

A player who is good at stealing bases needs not just running speed, but also good base-running instincts, quickness, and split-second timing. The scoring and guidelines for awarding a stolen base to a runner are covered by rule 10.07 of the Major League Baseball rule book.

All content from Kiddle encyclopedia articles (including the article images and facts) can be freely used under Attribution-ShareAlike license, unless stated otherwise. Cite this article:
Stolen base Facts for Kids. Kiddle Encyclopedia.