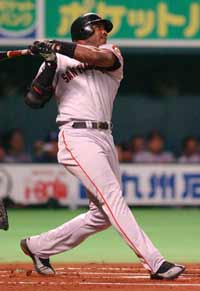 Barry Bonds (born July 24, 1964, in Riverside, California) is an American Major League Baseball player. Barry Bonds was a left fielder for the Pirates (1986-1992) and Giants (1993-2007)He holds the Major League Baseball career home run record with 762 home runs. He is currently a free agent. He is not signed with any team and is currently not playing baseball. He played his debut in May 30, 1986, for the Pittsburgh Pirates.

All content from Kiddle encyclopedia articles (including the article images and facts) can be freely used under Attribution-ShareAlike license, unless stated otherwise. Cite this article:
Barry Bonds Facts for Kids. Kiddle Encyclopedia.