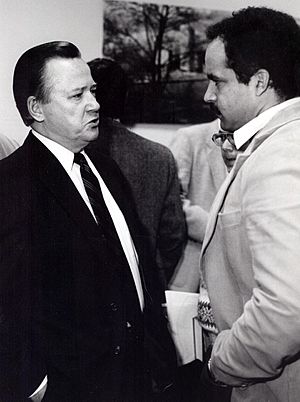 Henry J. "Hank" Peters (September 16, 1924 – January 4, 2015) was an American baseball executive. He was known for being the general manager of the Baltimore Orioles and to the Kansas City Athletics. Peters was born in St. Louis, Missouri.

Peters died from complications from a stroke in Boca Raton, Florida, aged 90.

All content from Kiddle encyclopedia articles (including the article images and facts) can be freely used under Attribution-ShareAlike license, unless stated otherwise. Cite this article:
Hank Peters Facts for Kids. Kiddle Encyclopedia.