Zebulon is the easternmost town in Wake County, North Carolina, United States. The population was 4,433 at the 2010 census. Zebulon is part of the Research Triangle metropolitan region. Five County Stadium, home to the Carolina Mudcats minor league baseball team, is located in the town. 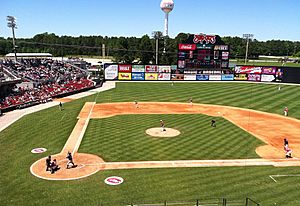 In 1906 the Raleigh and Pamlico Sound Railroad Company decided to bring the railroad through the Whitley and Horton family farms in eastern Wake County. Edgar B. Barbee and Falconer B. Arendell organized the Zebulon Company for development that same year. The company received its charter on February 15, 1906. Shortly thereafter, they began to divide up their 49 acres (20 ha) into lots, blocks, streets and avenues. On February 16, 1907, the town was officially recognized as Zebulon, North Carolina. The town was named after Zebulon Baird Vance, the Governor of North Carolina during the American Civil War. The first election was held in May 1907, and the first elected mayor was Thomas J. Horton.

There are three properties in Zebulon listed on the National Register of Historic Places: Wakelon School, Bennett Bunn Plantation, and the George and Neva Barbee House.

Zebulon is located in the northeast central region of North Carolina, where the North American Piedmont and Atlantic Coastal Plain regions meet. This area is known as the "fall line" because it marks the elevation inland at which waterfalls begin to appear in creeks and rivers. Its central Piedmont location situates Zebulon about three hours by car west of Atlantic Beach, North Carolina, and four hours east of the Great Smoky Mountains.

Zebulon is located on an elevated portion of land between the Little River and Moccasin Creek.

There were 1,551 households out of which 35.2% had children under the age of 18 living with them, 43.9% were married couples living together, 20.1% had a female householder with no husband present, and 31.7% were non-families. 26.8% of all households were made up of individuals and 10.4% had someone living alone who was 65 years of age or older. The average household size was 2.57 and the average family size was 3.09.

All content from Kiddle encyclopedia articles (including the article images and facts) can be freely used under Attribution-ShareAlike license, unless stated otherwise. Cite this article:
Zebulon, North Carolina Facts for Kids. Kiddle Encyclopedia.