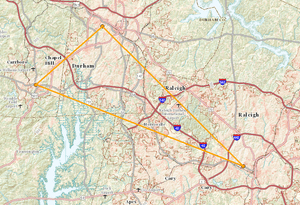 The Research Triangle, commonly referred to as simply The Triangle, is a region in the Piedmont of North Carolina in the United States, anchored by North Carolina State University, Duke University, University of North Carolina at Chapel Hill, and the cities of Raleigh and Durham and the town of Chapel Hill. The eight-county region, officially named the Raleigh–Durham–Chapel Hill combined statistical area (CSA), comprises the Raleigh and Durham–Chapel Hill metropolitan areas and the Dunn, Henderson, Oxford, and Sanford Micropolitan Statistical Areas. A 2013 Census estimate put the population at 2,037,430, making it the second largest metropolitan area in the state of North Carolina behind Charlotte. The Raleigh–Durham television market includes a broader 24-county area which includes Fayetteville, and has a population of 2,726,000 persons.

The "Triangle" name was cemented in the public consciousness in the 1950s with the creation of Research Triangle Park, home to numerous high-tech companies and enterprises. Although the name is now used to refer to the geographic region, "the Triangle" originally referred to the universities, whose research facilities, and the educated workforce they provide, have historically served as a major attraction for businesses located in the region. The region should not be confused with The Triad, which is a North Carolina region adjacent to and directly west of the Triangle comprising Greensboro, Winston-Salem, and High Point, among other cities.

Most of the Triangle is part of North Carolina's second, fourth, and thirteenth congressional districts.

Depending on which definition of the Research Triangle region is used, as few as three or as many as 16 counties are included as part of the region. All of these counties when included hold a population over 2,167,000 people. 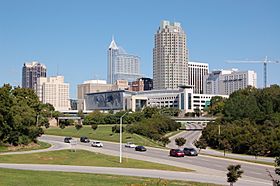 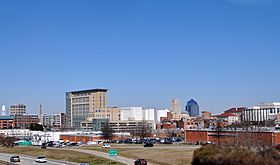 Suburbs with more than 10,000 inhabitants

Suburbs with fewer than 10,000 inhabitants

Nearby cities with more than 50,000 inhabitants

Nearby cities with fewer than 10,000 inhabitants

The two interstates diverge from one another in Orange County, with I-85 heading northeast through northern Durham County toward Virginia, while I-40 travels southeast through southern Durham, through the center of the region, and serves as the primary freeway through Raleigh. The related loop freeways I-440 and I-540 are primarily located in Wake County around Raleigh. I-440 begins at the interchange of US 1 and I-40 southwest of downtown Raleigh and arcs as a multiplex with US 1 northward around downtown with the formal designation as the Cliff Benson/Raleigh Beltline (cosigned with US 1 on three-fourths of its northern route) and ends at its junction with I-40 in southeast Raleigh. I-540, sometimes known as the Raleigh Outer Loop, extends from the US 64-264 Bypass to I-40 just inside Durham County, where it continues across the interstate as a state route (NC 540), prior to its becoming a toll road from the NC 54 interchange to the current terminus at NC Highway 55 near Holly Springs. I-95 serves the extreme eastern edge of the region, crossing north-south through suburban Johnston County.

U.S. Routes 1, 15, and 64 primarily serve the region as limited-access freeways or multilane highways with access roads. US 1 enters the region from the southwest as the Claude E. Pope Memorial Highway and travels through suburban Apex where it merges with US 64 and continues northeast through Cary. The two highways are codesignated for about 2 miles (3.2 km) until US 1 joins I-440 and US 64 with I-40 along the Raleigh–Cary border. Capital Boulevard, which is designated US 1 for half of its route and US 401 the other is not a limited-access freeway, although it is a major thoroughfare through northeast Raleigh and into the northern downtown area.

North Carolina Highway 147 is a limited-access freeway that connects I-85 with Toll Route NC 540 in northwestern Wake County. The older, toll-free portion of the four-lane route—known as the Durham Freeway or the I.L. "Buck" Dean Expressway—traverses downtown Durham and extends through Research Triangle Park to I-40. The Durham Freeway is often used as a detour or alternate route for I-40 through southwestern Durham the Chapel Hill area in cases of traffic accident, congestion or road construction delays. The tolled portion of NC 147, called the Triangle Expressway—North Carolina's first modern toll road when it opened to traffic in late 2011—continues past I-40 to Toll NC 540. Both Toll NC 147 and Toll NC 540 are modern facilities which collect tolls using transponders and license plate photo-capture technology.

A partnering system of multiple public transportation agencies currently serves the Triangle region under the joint GoTransit branding. Raleigh is served by the Capital Area Transit (CAT) municipal transit system, while Durham has the Durham Area Transit Authority (DATA) system. Chapel Hill is served by Chapel Hill Transit, and Cary is served by C-Tran public transit systems. However, Triangle Transit, formerly called the Triangle Transit Authority (TTA), works in cooperation with all area transit systems by offering transfers between its own routes and those of the other systems. Triangle Transit also coordinates an extensive vanpool and rideshare program that serves the region's larger employers and commute destinations.

Plans have been made to merge all of the area's municipal systems into Triangle Transit, and Triangle Transit also has proposed a regional rail system to connect downtown Durham, downtown Cary and downtown Raleigh with multiple suburban stops, as well as stops in the Research Triangle Park area. The agency's initial proposal was effectively cancelled in 2006, however, when the agency could not procure adequate federal funding. A committee of local business, transportation and government leaders currently are working with Triangle Transit to develop a new transit blueprint for the region, with various modes of rail transit, as well as bus rapid transit, open as options for consideration.

RDU opened the 10,000-foot (3,000 m) runway, 5L-23R, in 1986. American Airlines opened its north-south hub operation at RDU in the new Terminal C in June 1987, greatly increasing the size of RDU's operations with a new terminal including a new apron and runway. American brought RDU its first international flights to Bermuda, Cancun, Paris and London.

In 1996, American Airlines ceased its hub operations at RDU due to Pan Am and Eastern Airlines. Pan Am and Eastern were Miami's main tenants until 1991, when both carriers went bankrupt. Their hubs at MIA were taken over by United Airlines and American Airlines. This created a difficulty in competing with US Airways' hub in Charlotte and Delta Air Lines' hub in Atlanta, Georgia for passengers traveling between smaller cities in the North and South. Midway Airlines entered the market, starting service in 1995 with the then somewhat novel concept of 50-seat Canadair Regional Jets providing service from its RDU hub primarily along the East Coast. Midway, originally incorporated in Chicago, had some success after moving its operations to the midpoint of the eastern United States at RDU and its headquarters to Morrisville, NC. The carrier ultimately could not overcome three weighty challenges: the arrival of Southwest Airlines, the refusal of American Airlines to renew the frequent flyer affiliation it had with Midway (thus dispatching numerous higher fare-paying businesspeople to airlines with better reward destinations), and the significant blow of September 11, 2001. Midway Airlines filed Chapter 11 bankruptcy on August 13, 2001, and ceased operations entirely on October 30, 2003.

In February 2000, RDU was ranked as the nation's second fastest-growing major airport in the United States, by Airports Council International, based on 1999 statistics. Passenger growth hit 24% over the previous year, ranking RDU second only to Washington Dulles International Airport. RDU opened Terminal A south concourse for use by Northwest and Continental Airlines in 2001. The addition added 46,000 square feet (4,300 m2) and five aircraft gates to the terminal. Terminal A became designated as Terminal 1 on October 26, 2008. In 2003, RDU also dedicated a new general aviation terminal. RDU continues to keep pace with its growth by redeveloping Terminal C into a new state-of-the-art terminal, now known as Terminal 2, which opened in October 2008. 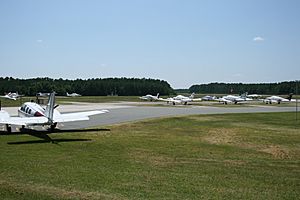 Several licensed private general-aviation and agricultural airfields are located in the region's suburban areas and nearby rural communities: 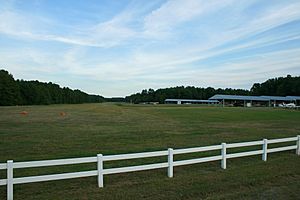 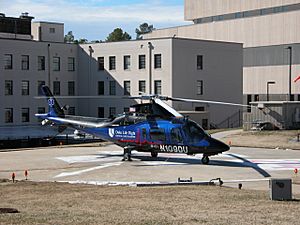 A number of helipads (i.e. marked landing sites not classified under the FAA LID system) also serve a variety of additional medical facilities (such as UNC Hospitals in Chapel Hill), as well as private, corporate and governmental interests, throughout the region.

Although still in the planning and evaluation phases as of the end of 2014, the SEHSR (Southeast High Speed Rail Corridor) project is expected to serve the area.

Map of the Triangle 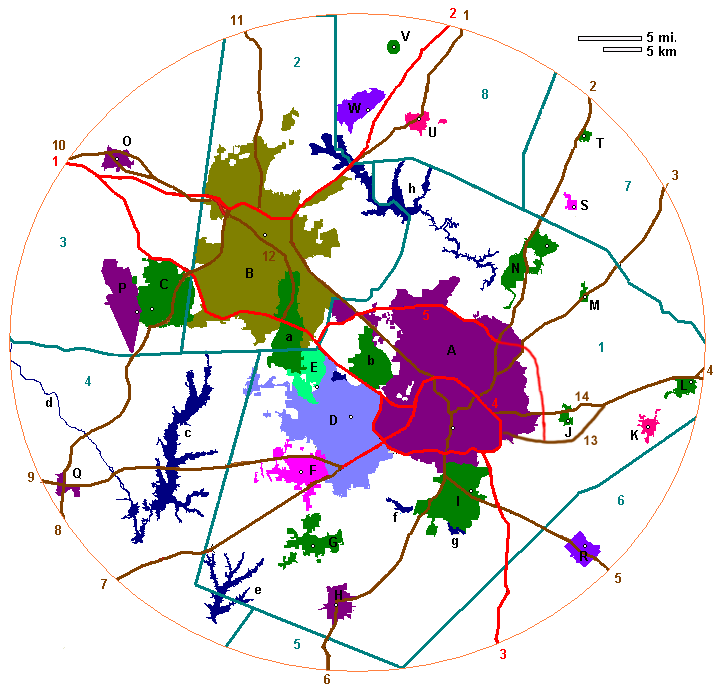 All content from Kiddle encyclopedia articles (including the article images and facts) can be freely used under Attribution-ShareAlike license, unless stated otherwise. Cite this article:
Research Triangle Facts for Kids. Kiddle Encyclopedia.