B. Everett Jordan Lake is a reservoir in New Hope Valley, west of Cary and south of Durham in Chatham County, North Carolina, in the United States; the northernmost end of the lake extends into southwestern Durham County.

Part of the Jordan Lake State Recreation Area, the reservoir covers 13,940 acres (5,640 ha) with a shoreline of 180 miles (290 km) at its standard water level of 216 feet (66 m) above sea level. It was developed as part of a flood control project prompted by a particularly damaging tropical storm that hit the region downstream in September 1945. Constructed at an original cost of US $146,300,000, it is owned and operated by the United States Army Corps of Engineers, which dammed and flooded the Haw River and New Hope River between 1973 and 1983.

The Jordan Lake Dam (also known as the B. Everett Jordan Project and the New Hope Dam) is located upstream from the mouth of the Haw River in the upper Cape Fear River drainage basin. Completed in 1974 by the Nello L. Teer Company. 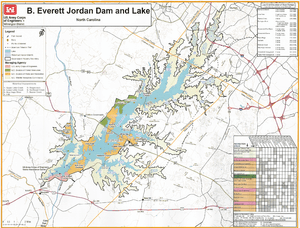 Jordan Lake offers a variety of facilities for recreation, conservation, and flood control

During the construction of the reservoir, much of the area was permanently changed. Many farming families were relocated as the project was developed and several roads in eastern Chatham County were either rerouted or taken out of commission completely. Some of the roads were never demolished, but simply allowed to flood over. When the lake is at low water volume, many of these roads can still be seen and some have even been utilized for makeshift boat ramps.

Originally authorized in 1963 as the New Hope Lake Project, the reservoir was renamed in 1974 in memory of B. Everett Jordan, former US Senator from North Carolina.

On December 21, 2017 Researchers at Duke University have discovered elevated levels of several perfluorinated compounds an unregulated family of industrial chemicals including some that can raise cancer risks in Jordan Lake and drinking water treated by the town of Cary. Cary water treatment officials, who have independently confirmed the findings of Duke researchers, say the town's water is safe to drink. They also point out that the compounds detected are still below health advisory levels set by the U.S. Environmental Protection Agency. Testing still continues as of March 8 2018.

All content from Kiddle encyclopedia articles (including the article images and facts) can be freely used under Attribution-ShareAlike license, unless stated otherwise. Cite this article:
Jordan Lake Facts for Kids. Kiddle Encyclopedia.