Neighboring towns include Apex to the north and Fuquay-Varina to the south.

There were 8,147 households, out of which 55.5% had children under the age of 18 living with them, 70.1% were married couples living together, 9.4% had a female householder with no husband present, and 17.7% were non-families. 14.5% of all households were made up of individuals, and 2.9% had someone living alone who was 65 years of age or older. The average household size was 3.03 and the average family size was 3.38.

The Tuscarora Indians used the area around Holly Springs as a hunting ground prior to colonial settlement. This tribe fled North Carolina around 1720 to escape the influx of Europeans and eventually became the sixth nation of the Iroquois.

The town of Holly Springs grew around fresh water springs, believed to be the original "holly springs", near the intersection of what is now Avent Ferry Road and Cass Holt Road. These roads linked Raleigh to the Cape Fear River and ultimately to Fayetteville as well as linking Hillsborough to Smithfield.

By 1800, the crossroads had spawned a village, including a general store built by Richard Jones, a Baptist church, and a Masonic lodge. These were soon followed by a sawmill and cotton gin.

Archibald Leslie, a Scottish tailor, arrived in the community around 1817, opened a tailoring business and a store and soon began construction of a house near the springs. This 38-room mansion, now known as the Leslie-Alford-Mims House, is located off Avent Ferry Road near Town Hall.

Holly Springs Baptist Church, established in 1822, was the town's first successful church. The Masonic Lodge #115 was formed in 1847, and in 1854 a two-story lodge building was erected. This building also served as one of the town's first schools. Holly Springs Academy opened its doors in 1854 to prepare young men for admission to Wake Forest College. Two years later, the first floor of the lodge was used as a school for local girls. The lodge was honored with a historical-site plaque in the fall of 2006.

During the Civil War, North Carolina seceded from the Union. Captain Oscar R. Rand recruited willing men of all ages to join Governor Zebulon Baird Vance's 26th Infantry Regiment in the Confederate States Army. On a single day at the Battle of Gettysburg, during the assault known as Pickett's Charge, 13 of the 14 commanding officers died. Only 81 soldiers out of a unit of 880 lived to tell the story.

With the men of the town gone, both schools in Holly Springs closed, and Holly Springs became a virtual ghost town. When the Union Army receded northward, Holly Springs lay in its path. Bands of marauding robbers known as "bummers" raided the area farms and homesteads, taking food, supplies, silver, clothes and anything of value.

Also during the war, for a two-week period, a segment of the Union Army encamped near Holly Springs and set up headquarters in the Leslie-Alford-Mims House. It is reported that Mrs. Leslie hated the Yankees bitterly but loved her home more, so she treated them with cool civility. This may have protected the house from destruction, the fate of many other grand southern houses. Mrs. Leslie is said to have “charmed the soldiers so that they didn't burn the house down, but they did get the chickens.”

The little community of Holly Springs had appeared to be on its way to becoming a bustling town, but the Civil War ultimately left the community economically devastated. Some families moved away. The exodus was encouraged by construction of the Chatham Railroad through the village of Apex, giving that neighboring town a link to the outside world which Holly Springs did not have. Historian M. N. Amis described Holly Springs in 1871 as "a deserted village."

The Town of Holly Springs was established in 1877.

In 1875, George Benton Alford moved his successful mercantile business from Middle Creek Township to Holly Springs and was instrumental in beginning an economic revival in the community. A year later he bought the Leslie house, which was the centerpiece of the village. Over the years he made significant additions and improvements to the house until it became one of the largest mansions in Wake County, one of the few with its own ballroom.

Alford, a businessman and politician, started several businesses including a mercantile store, a sawmill, a cotton gin and the Holly Springs Land and Improvement Company, and eventually, the General Assembly granted the town a charter. He started a newspaper, The Cape Fear Enterprise, which he used to promote the town. He also got other prominent men in the community to join him in seeking a charter of incorporation for the Cape Fear and Northern Railroad, which became the Durham and Southern Railway.

During the post-war period, several attempts were made to revive the Holly Springs Academy, but none was successful. For a time, children were taught in private homes, and eventually the first co-educational school, serving 125 students, was opened by the Masons. In 1906, the town addressed the need for a larger and better-equipped facility to educate the children. Under the leadership of Raymond A. Burt, J. Carter, and the Women's School Betterment Association, 10 acres (40,000 m²) near the springs were purchased (this was, in time, the site of the library and cultural arts center). The first bell rang for classes in 1908.

By this point, Alford was a wealthy man, and he had dreams of turning Holly Springs into an industrial city of 10,000 people. The town’s population had not increased a great deal, holding at around 300, but the business community and the schools were drawing outsiders. The flourishing village was once again struck down by war with the start of World War I. The young men went off to fight, and many others went away to work in war-related industry.

In 1923 Alford died, leaving the town without an effective voice in political circles. Then came the Great Depression. The Bank of Holly Springs, established before the turn of the 20th century, failed in 1924. Holly Springs experienced difficulty during this time, although WPA funds were used to build a school auditorium. The town missed out on the new federal road-building projects being carried out to provide employment.

During the early 1960s, with a population stabilized at around 580, the town installed fluorescent street lights about the same time that Highway 55 (Main Street) was widened. A general clean-up effort netted the town an award from a state appearance committee. Racially the town became less balanced with a stronger minority population existing to the late 1980s. During this period several black businesses were flourishing: a dry cleaning business, barbershop, three neighborhood stores, and the local gathering place of the "Packhouse" built by one of the town's prominent black citizens by the name of George Grigsby, for whom Grigsby Avenue (previously called Old Fuquay Road) was named. The town board consisted of many of its prominent black citizens, among them Burnis Lassiter, Cora Lassiter, James Norris (Holly Springs' first black mayor), John McNeil, Edison Perkins, George Kimble, and "Preacher" Beckwith. Later, in the 1980s other prominent black citizens joined the town council, among them Nancy Womble, Reverend Otis Byrd, and one who remains on the town council today, Parrish "Ham" Womble.

During this period the town hired Dessie Mae Womble, the first black female chief of police in the state of North Carolina. As segregation gave way to integration, the Holly Springs School for Blacks was closed, and many of its students were sent to surrounding communities to further their educations. This was the beginning of an era of busing for the community, which continued until the late 1990s when Holly Springs Elementary School on Holly Springs Road was opened.

It was not until the town built its first sewage plant in 1987 that any real growth occurred. It was 1992 before Holly Springs, in line for the spillover from increased populations in Cary and Apex, suddenly boomed. Population increased from 900 in 1992 to an estimated 6000 in 1998 to nearly 25,000 in 2010. 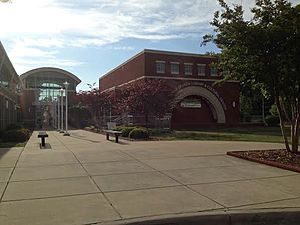 On July 18, 2006, it was announced that the pharmaceutical company Novartis would be building a manufacturing facility in Holly Springs and employing approximately 350 to produce flu vaccines using new technologies. The manufacturing facility was built on 167 acres (0.68 km2) in Holly Springs Business Park off N.C. 55 Bypass. Construction was completed in late 2008. Novartis's investment is at least $267 million USD and eventually could reach $600 million USD.

Bristol-Myers Squibb expressed interest in county-owned land along N.C. 55 Bypass at the future interchange of Interstate 540. The County originally expressed a desire to allow the proposed landfill site to be used for economic development to be sold to the company, however county leaders refused to relocate a solid waste transfer station which would be at the entrance. When the company decided not to locate on the site, the Wake County Board of Commissioners voted five to two to proceed with plans to build a landfill there.

For years, town leaders have become increasingly confident that Holly Springs is positioned to experience high growth, propelled by the economic engine of Research Triangle Park (RTP). At a distance of 18 miles (29 km), Holly Springs is close to RTP.

In 2007, it was ranked the 22nd best small town to live in, according to a CNNMoney.com evaluation.

The Harrington-Dewar House, Holly Springs Masonic Lodge, and Leslie-Alford-Mims House are listed on the National Register of Historic Places.

On April 16, 2011, a large tornado touched down close to the Holly Springs town center, uprooting trees and destroying homes and buildings.

Holly Springs is also home to the Holly Springs Salamanders, a baseball team which will begin play in 2015 in the Coastal Plain League.

All content from Kiddle encyclopedia articles (including the article images and facts) can be freely used under Attribution-ShareAlike license, unless stated otherwise. Cite this article:
Holly Springs, North Carolina Facts for Kids. Kiddle Encyclopedia.