The town of Hillsborough is the county seat of Orange County, North Carolina. The population was 6,087 in 2010.

Its name was unofficially shortened to "Hillsboro" over the years (beginning in the 19th century) but was changed back to its original spelling in the late 1960s.

Local Native American groups had lived in the Hillsborough area for thousands of years by the time European-American settlers discovered the area. Siouan-language groups such as the Occaneechi and the Eno were living in the Hillsborough area at the time of European contact, though they would later be displaced. The explorer John Lawson recorded visiting "Occaneechi Town" when he travelled through North Carolina in 1701.

In the early 18th century, the Occaneechi left Hillsborough for Virginia, returning to the area around 1780. An original Occaneechi farming village was excavated by an archaeological team from UNC-Chapel Hill in the 1980s. A replica of an Occaneechi village stands in closivity to the original Eno River settlement. 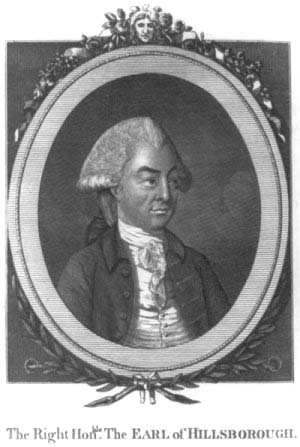 The Earl of Hillsborough 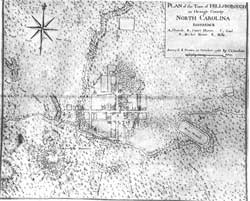 A map of the town produced in 1768 by Claude J. Sauthier. 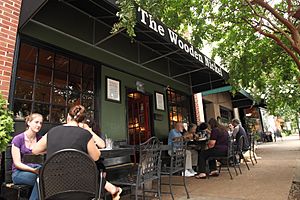 Hillsborough was founded in 1754 and was first owned, surveyed, and mapped by William Churton (a surveyor for Earl Granville). Originally to be named Orange, it was first named Corbin Town (for Francis Corbin, a member of the governor's council and one of Granville's land agents) and was renamed Childsburgh (in honor of Thomas Child, the attorney general for North Carolina from 1751–1760 and another one of Granville's land agents) in 1759. It was not until 1766 that it was named Hillsborough, after the Earl of Hillsborough, the British secretary of state for the colonies and a relative of royal Governor William Tryon.

Hillsborough was an early Piedmont colonial town where court was held, and was the scene of some pre-Revolutionary War tensions. In the late 1760s, tensions between Piedmont farmers and county officers welled up in the Regulator movement, which had its epicenter in Hillsborough. With specie scarce, many inland farmers found themselves unable to pay their taxes and resented the consequent seizure of their property. Local sheriffs sometimes kept taxes for their own gain and sometimes charged twice for the same tax. Governor William Tryon's conspicuous consumption in the construction of a new governor's mansion at New Bern fuelled the movement's resentment. As the western districts were under-represented in the colonial legislature, it was difficult for the farmers to obtain redress by legislative means. Ultimately, the frustrated farmers took to arms and closed the court in Hillsborough, dragging those they saw as corrupt officials through the streets. Tryon and North Carolina militia troops marched to the region and defeated the Regulators at the Battle of Alamance in May 1771. Several trials were held after the war, resulting in the hanging of six Regulators at Hillsborough on June 19, 1771.

The North Carolina Provincial Congress met in Hillsborough August 20–September 10, 1775, at the outset of the American Revolution, as did the North Carolina General Assembly in 1778, 1782 and 1783. The town was also the site of the first North Carolina ratifying convention, which met July 21–August 2, 1788 to deliberate and determine whether or not to ratify the Constitution recommended to the states by the Constitutional Convention held in Philadelphia the previous summer. With the hope of effecting the incorporation of a Bill of Rights into the frame of government, delegates voted (184–84) to neither ratify nor reject the Constitution. During the bicentennial celebration of the writing and ratification of the Constitution, a historical marker was placed at the site (now the Hillsborough Presbyterian Church) commemorating the convention.

William Hooper, a signer of the Declaration of Independence, was buried in the Presbyterian Church cemetery in October 1790. However, his remains were later reinterred at Guilford Court House Military Battlefield. His original gravestone remains in the town cemetery.

The Burwell family ran a girl's academy called the Burwell School from 1837 to 1857 in their home on Churton Street. Elizabeth Keckley was enslaved in the Burwell household as a teenager. She later became the dressmaker and confidant of Mary Todd Lincoln and wrote a memoir.

When the Civil War began, Hillsborough was reluctant to support secession. However, many citizens went off to fight for the Confederacy.

In March 1865, Confederate General Joseph E. Johnston wintered just outside Hillsborough at the Dickson home, which now serves as the Hillsborough Welcome Center in downtown (the house was moved from its original site in the early 1980s due to commercial development). The main portion of the Confederate Army of Tennessee was encamped around Greensboro.

After his March to the Sea, while camped in Raleigh, Union General William T. Sherman offered an armistice to Johnston, who agreed to meet to discuss terms of surrender. Johnston, traveling east from Hillsborough and Sherman, traveling west from Raleigh along the Hillsborough-Raleigh Road, met approximately half-way near present-day Durham (then Durham Station) at the home of James and Nancy Bennett, a farmhouse now known as Bennett Place. The two generals met three times on April 17, 18th, and finally on the 26th, which resulted in the final terms of surrender. Johnston surrendered 89,270 Southern troops who were still active in North Carolina, South Carolina, Georgia, and Florida. This was the largest surrender of troops during the war, and effectively ended the Civil War.

There are numerous historical sites to visit in Hillsborough. The Town was established where the Great Indian Trading Path crossed the Eno River.

For many years Hillsborough was a leading town in its region of North Carolina and many significant historical events occurred here. There remain more than 100 late eighteenth and nineteenth century structures that illustrate this history. In addition, there are numerous secondary buildings, bridges, mill sites and dams along the Eno River, and Native American relics from the locations of ancient towns stretching back thousands of years.

The Hillsborough Visitors Center operates from this late-18th century Quaker-plan house. It was moved from its original location (1 mi (1.6 km) southeast of Hillsborough to its present location in the historic district. The site also includes an office used by Confederate Gen. Joseph E. Johnston.

The Old Orange County Courthouse is an 1844 Greek-revival building designed and built by local builder John Berry. The courthouse is still in use for county judicial business.

The Inn at Teardrops 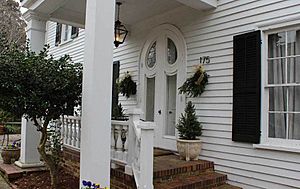 The Inn at Teardrops

The name comes from the teardrop shaped glass on the front doors and the molding around the eaves of the house. Owned by Edmund Fanning until he sold it to Thomas King, an Inn keeper, in 1768. The main body of the present structure is probably King's old Inn. Notable eighteenth-century owners include General Thomas Person, Peter Malett, William Duffy and John Taylor, who was clerk of the Superior Court from 1800 to 1845. In 1938, the J.W. Richmond family bought the property and re-opened the house as a private residence. He reopened the house after extensive renovations, as 'The Inn at Teardrops', a bed and breakfast.

Margaret Lane Cemetery, sometimes called the Old Slave Cemetery, first appears in written record in 1885. It is believed that Peter Brown Ruffin, a landowner and employer to the west of Hillsborough, bought the two 1-acre (0.40 ha) lots that comprise the cemetery from the town in 1854 as a burial.

Occoneechee Speedway, just outside Hillsborough, was one of the first two NASCAR tracks to open and is one of two tracks remaining from that inaugural 1949 season, Martinsville Speedway being the other. The Historic Occoneechee Speedway Trail (HOST), is a 3 mi (4.8 km) trail located on 44 acres (180,000 m2) at the site of the former Speedway. Bill France and the early founders of NASCAR bought land to build a 1 mi (1.6 km) oval track at Hillsborough, but opposition from local religious leaders prevented the track from being built in the town and NASCAR officials built the large speedway Talladega Superspeedway in Talladega, Alabama instead.

Hillsborough is located along the Eno River.

The architecture of nearby Duke University incorporates the stone from the local Hillsborough Quarry. Now sometimes referred to as the Duke Stone, it is included in the design of almost every building on Duke's West Campus which was originally designed by architect Julian Abele. It is rumored that James B. Duke offered Princeton University a large gift under the condition that the university's name be changed from Princeton to Duke. Princeton declined and Duke took his gift to Durham's then, Trinity College.

There were 2,101 households out of which 34.9% had children under the age of 18 living with them, 42.9% were married couples living together, 20.9% had a female householder with no husband present, and 32.0% were non-families. 26.2% of all households were made up of individuals and 9.6% had someone living alone who was 65 years of age or older. The average household size was 2.48 and the average family size was 2.99. 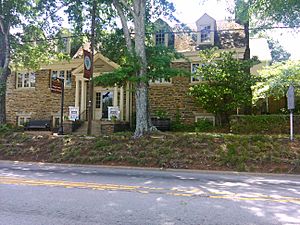 All content from Kiddle encyclopedia articles (including the article images and facts) can be freely used under Attribution-ShareAlike license, unless stated otherwise. Cite this article:
Hillsborough, North Carolina Facts for Kids. Kiddle Encyclopedia.