Occoneechee Speedway was one of the first two NASCAR tracks to open. It closed in 1968 and is the only dirt track remaining from the inaugural 1949 season.

It is located just outside the town of Hillsborough, North Carolina. 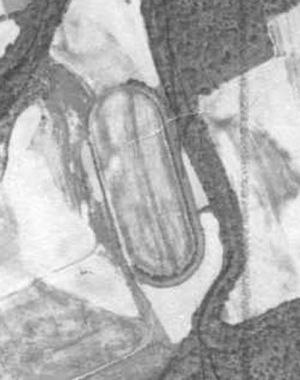 The horse racetrack on Occoneechee farm, 1938

The Occoneechee farm occupied the land in the late 19th century. The farm was named after the Occaneechi Indians that lived in the area in the late 17th century and late 18th century. The landowner, Julian S. Carr, raced horses, and built a half mile horse racing track.

Bill France noticed the horse racing track and expanse of open land while piloting his airplane. On the site of the earlier horse track, he built a 0.9-mile dirt track in September 1947, two months before NASCAR was organized. In its earliest days, Fonty Flock and his brothers Bob and Tim dominated the track. Louise Smith became NASCAR's first female driver at the track in the fall of 1949.

The Occoneechee Speedway hosted stock car racing legends such as Fireball Roberts, Richard Petty, Ned Jarrett and Junior Johnson. It was a crown jewel in Nascar for most of its existence.

The Sunday racing schedule prompted grassroots opposition in Hillsborough, and the final race was a Richard Petty victory on September 15, 1968.

The loss off the Speedway later made Bill France look for a new spot in the area to build a bigger, better, and faster Speedway of speeds in excess of Daytona International Speedway. Eventually he looked towards South Carolina and eventually Alabama where he built the Talladega Superspeedway which opened a year later where it took Occoneechee Speedway’s date on the schedule.

The Occoneechee Speedway site is now heavily forested with pines and sycamores. The grandstands are still visible, as is much of the mile–long oval track. It was placed on the National Register of Historic Places and now comprises 44 acres (180,000 m2) with over 3 miles (4.8 km) of trails. A walking trail was built in 2003 that crisscrosses the clay track. A non-profit local group, The Historic Speedway Group, continues to organize volunteers to renovate historic structures and maintain the track and trails. The group has collected an impressive archive of videos, photographs, and historical information about the site.

In 1968, Richard Petty won the last race held at the track, which by that time was called The Orange Speedway. The Occoneechee/Orange speedway, along with North Wilkesboro Speedway, is one of the inspirations for the Thomasville Speedway in the Pixar movie Cars 3 in which Petty voices the character Strip Weathers.

All content from Kiddle encyclopedia articles (including the article images and facts) can be freely used under Attribution-ShareAlike license, unless stated otherwise. Cite this article:
Occoneechee Speedway Facts for Kids. Kiddle Encyclopedia.