Wake County is a county in the US state of North Carolina. As of July 1, 2015, the population was 1,024,198, making it North Carolina's second-most populated county. From July 2005 to July 2006, Wake County was the 9th fastest-growing county in the United States, with the town of Cary and the city of Raleigh being the 8th and 15th fastest-growing cities, respectively.

Its county seat is Raleigh, which is also the state capital. Eleven other municipalities are in Wake County, the largest of which is Cary, the third largest city of the Research Triangle region and the seventh largest municipality in North Carolina.

Present day Wake County was once part of the Tuscarora nation.

Wake County was formed in 1771 from parts of Cumberland County, Johnston County, and Orange County. The first courthouse was built at a village originally called Wake Courthouse, now known as Bloomsbury. In 1771, the first elections and court were held, and the first militia units were organized.

Wake County lost some of its territory through the formation of other counties. Parts were included in Franklin County in 1787, and in Durham County in both 1881 and 1911.

During the colonial period of North Carolina, the state capital was New Bern. For several years during and after the Revolutionary War there was no capital, and the General Assembly met in various locations. Fayetteville was the state capital from 1789 to 1793, when Raleigh became the permanent state capital. In 1792, a commission was appointed to select a site to build a permanent state capital. The commission members favored land owned by Colonel John Hinton across the Neuse River, but the night before the final vote the committee adjourned to the home of Joel Lane for an evening of food and spirits. The next day, the vote went in Lane's favor.

Lane named Wake County in honor of Margaret Wake, wife of colonial Governor William Tryon. Raleigh was named after Sir Walter Raleigh, and established in 1792 on 1,000 acres (4.0 km2) purchased from Lane. Raleigh had never set foot in North Carolina, but he had sponsored the establishment of the first English colony in North America on North Carolina's Roanoke Island in 1585. The city of Raleigh became both the state capital and the new seat of Wake County.

The Battle at Morrisville Station was fought April 13–15, 1865 in Morrisville, North Carolina during the Carolinas Campaign of the American Civil War. It was the last official battle of the Civil War between the armies of Major General William T. Sherman and General Joseph E. Johnston. General Judson Kilpatrick, commanding officer of the Union cavalry advance, compelled Confederate forces under the command of Generals Wade Hampton III and Joseph Wheeler to withdraw in haste. They had been frantically trying to transport their remaining supplies and wounded by rail westward toward the final Confederate encampment in Greensboro, NC. Kilpatrick used artillery on the heights overlooking Morrisville Station and cavalry charges to push the Confederates out of the small village leaving many needed supplies behind. However, the trains were able to withdraw with wounded from the Battle of Bentonville and the Battle of Averasboro. Later, General Johnston sent a courier to the Federal encampments at Morrisville with a message for Major General Sherman requesting a conference to discuss an armistice. Several days later the two generals met at Bennett Place near Durham on April 17, 1865 to begin discussing the terms of what would become the largest surrender of the war. 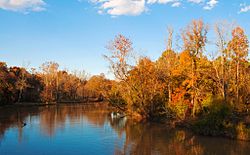 Wake County is located in the northeast central region of North Carolina, where the North American Piedmont and Atlantic Coastal Plain regions meet. This area is known as the "fall line" because it marks the elevation inland at which waterfalls begin to appear in creeks and rivers. As a result, most of Wake County features gently rolling hills that slope eastward toward the state's flat coastal plain. Its central Piedmont location situates the county about three hours west of Atlantic Beach, North Carolina, by car and four hours east of the Great Smoky Mountains.

Bodies of water that are located in Wake County include Lake Crabtree, Crabtree Creek, Lake Johnson, the Neuse River, and portions of Falls Lake and Jordan Lake.

The county, at the National Weather Service in Raleigh, receives on average 7 inches (180 mm) of snow in the winter. Freezing rain and sleet occur most winters, and occasionally the area experiences a major damaging ice storm.

The North Carolina Museum of Art, occupying a large suburban campus on Blue Ridge Road near the State Fairgrounds, houses one of the premier public art collections between Washington, D.C. and Atlanta. In addition to collections of American art, European art and ancient art, the museum recently has hosted major exhibitions featuring Auguste Rodin (in 2000) and Claude Monet (in 2006–07), each attracting more than 200,000 visitors. The museum is currently hosting a collection of works by Leonardo da Vinci and M.C. Escher. Unlike most public museums, the North Carolina Museum of Art acquired a large number of the works in its permanent collection through purchases with public funds. The museum's outdoor park is one of the largest such art parks in the country. 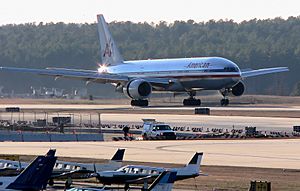 An American Airlines Boeing 777 from London Gatwick, lands at RDU. 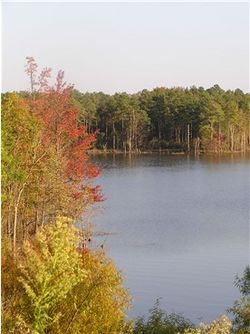 There are 152 county parks, city parks, public swimming and public tennis facilities in Wake County. In addition, there are 53 community centers. Notable parks include Pullen Park and Yates Mill Park. The American Tobacco Trail is a 22-mile (35 km) rail trail project that is located in the Research Triangle Park region. Fifteen miles of the trail is located in Wake County and is open to pedestrians, cyclists, equestrians (in non-urban sections), and other non-motorized users. 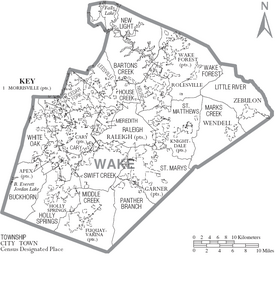 All content from Kiddle encyclopedia articles (including the article images and facts) can be freely used under Attribution-ShareAlike license, unless stated otherwise. Cite this article:
Wake County, North Carolina Facts for Kids. Kiddle Encyclopedia.