Harnett County is a county located in the U.S. state of North Carolina. As of the 2020 census, the population was 133,568. Its county seat is Lillington, and its largest city is Dunn. Harnett County is part of the Fayetteville Metropolitan Statistical Area.

Harnett County was formed in 1855 from land given by Cumberland County. It was named for American Revolutionary war soldier Cornelius Harnett, who was also a delegate to the Continental Congress. The first settlers came to the region in the mid-1720s, and were followed by Highland Scots immigrants. The Scots settled in the foothills, where land was more affordable, rather than in the rich alluvial soil area of the coastal plain. After the defeat by the British of Bonny Prince Charles at Culloden, Scots immigrants came up the Cape Fear River in ever increasing numbers and settled in western Harnett County. British immigrants had settled primarily along the banks of the Cape Fear River in the coastal area, generally from Erwin to Wilmington.

During the American Revolutionary War, many of the Scots were Loyalists. In their defeat in Scotland, they had been forced to take ironclad vows that prohibited taking up arms against the British.

Though Harnett County was not a site of warfare during the Civil War, one of the last battles took place near Averasboro which was once the third most populated town in North Carolina but is no longer in existence. During the Carolinas Campaign the Left Wing of General William Sherman's army under the command of Maj. General Henry W. Slocum defeated the army of General William Hardee in the Battle of Averasborough and proceeded eastward. A centennial celebration of the event was held in 1965 at the site of the battlefield. 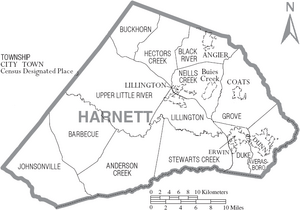 The county is served by the Harnett County Library System, based in Lillington with branches at Angier, Coats, Dunn, Erwin, Anderson Creek Primary School, and Boone Trail Community Center and Library.

All content from Kiddle encyclopedia articles (including the article images and facts) can be freely used under Attribution-ShareAlike license, unless stated otherwise. Cite this article:
Harnett County, North Carolina Facts for Kids. Kiddle Encyclopedia.