Johnston County is a county located in the U.S. state of North Carolina. As of the 2010 census, the population was 168,878. Its county seat is Smithfield.

Visitor attractions in Johnston County include several heritage museums and historic sites. The Bentonville Battlefield State Historic Site is located in eastern Johnston County, and it is the largest Civil War Battlefield in North Carolina. The Battle of Bentonville was fought March 19–21, 1865, and was the only Confederate offensive targeted to stop General Sherman's march through the south.

The Tobacco Farm Life Museum in Kenly has been collecting artifacts and showcasing the heritage of the Eastern North Carolina farmer for over 25 years. The site includes a museum and restored farmstead, working blacksmith shop, one-room school house and the site hosts several events each year.

The Ava Gardner Museum located in Smithfield is home to an incredible collection of artifacts such as scripts, movie posters, costumes and personal belongings of screen legend, Ava Gardner, who was born and raised in Johnston County.

The Johnston County Heritage Center is in Downtown Smithfield, and houses artifacts from all over the county. The Heritage Center has become known as one of the best equipped facilities in the country for studying local history and genealogy.

The Johnston County Arts Council promotes arts in the county and its schools. Smithfield is home to an annual Ava Gardner Film Festival (AGFF), which celebrates the life of the actress. In 2008 the festival screened over 40 films in four theaters, including world, regional and state premiers. Rapper Petey Pablo mentions Johnston County in his hit song Raise Up.

The Meadow community is home to Meadow Lights, an annual display of Christmas lights. 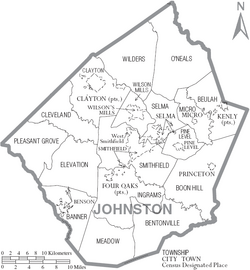 Public education in Johnston County is served by the Johnston County School District, which has 46 schools and serves more than 35,400 students. In addition, one charter schools and five private schools are located in the county. In 2021, the county school board banned the teaching of critical race theory.

All content from Kiddle encyclopedia articles (including the article images and facts) can be freely used under Attribution-ShareAlike license, unless stated otherwise. Cite this article:
Johnston County, North Carolina Facts for Kids. Kiddle Encyclopedia.