Selma is a town in Johnston County, North Carolina, United States. In 2010, the population was 6,073, and as of 2018 the estimated population was 6,913. Selma is part of the Raleigh-Durham-Cary Combined Statistical Area. The area has a population over 1.7 million residents, though the town of Selma is able to maintain its rural character. The Everitt P. Stevens House, located in Selma, was the site of the last Grand Review of the Confederate Army held on April 6, 1865, after its defeat at the Battle of Bentonville.

According to the United States Census Bureau, the town has a total area of 3.2 square miles (8.3 km2), all of it land.

Approximately 36% of people in Selma are affiliated with a religion. The predominant religion in Selma is Christianity, with the largest numbers of adherents being Baptist (15.64%) and Methodist (6.02%). Others include Pentecostal (4.02%), Roman Catholic (2.52%) and Presbyterian (1.46%).

The Johnston County Area Transit System (JCATS) is a coordinated transit system that provides transportation services in Selma and throughout Johnston County. 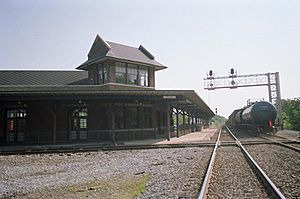 On May 1, 1867, lots were sold around a newly established station on the North Carolina Railroad. From those lots, the town was built and considered a railroad town for many decades. Selma was officially chartered as a town on February 11, 1873. The town recently renovated its 1924 passenger depot, which has Amtrak service. The town is also home to the Mitchener Station, which was built in 1855 and thought to be the oldest surviving train station in North Carolina. After Interstate 95 was built in the late 1950s, the town experienced growth due to its location next to the interstate. Today, there are many hotels and restaurants located in the area thanks to the traffic from I-95.

Selma is home to two schools within the Johnston County School District:

All content from Kiddle encyclopedia articles (including the article images and facts) can be freely used under Attribution-ShareAlike license, unless stated otherwise. Cite this article:
Selma, North Carolina Facts for Kids. Kiddle Encyclopedia.