Wayne County is a county located in the U.S. state of North Carolina. As of the 2020 Census, the population was 117,333. Its county seat is Goldsboro and it is home to Seymour Johnson Air Force Base.

Prior to 1730, Native Americans were the only known occupants of the territory now known as Wayne county. Settlers trickled into the territory, but there was no general movement of immigration until after 1750. Wayne County was established on November 2, 1779 from the western part of Dobbs County. It was named for "Mad Anthony" Wayne, a general in the American Revolutionary War. The act, establishing the County, provided the first court should be held at the home of Josiah Sasser at which time the justices were to decide on a place for all subsequent courts until a courthouse could be erected. By 1782 the commissioners were named. In 1787 an act was passed establishing Waynesborough on the west side of the Neuse River on the land of Doctor Andrew Bass where the courthouse now stands.

Wayne County's surface is level to gently rolling uplands with broad bottoms along the rivers and some creeks. Elevations are predominantly 120 to 145 feet above sea level. The largest waterway, the Neuse River, bisects the lower central portion of the county and cuts a deep channel 20 to 40 feet deep as it flows in an eastward direction. Unusual river bluffs occur in the vicinity of Seven Springs. In addition to the Neuse River, the county is drained by the Little River, the Northeast Cape Fear River and numerous creeks.

Wayne County is underlain by unconsolidated beds of sand, clay and gravel. For the most part, these beds were deposited in seawater as the sea advanced and retreated during the geologic development of the Atlantic Coastal Plain. To a much lesser extent, streams deposited layers of sediment which mixed with that deposited on the sea floor.

The climate in Wayne County is characterized by warm summers and moderate winters. The average temperature is about 62 degrees. Annual precipitation is about 50 inches of rainfall per year, with the major portion occurring in the late spring and summer.

Work is currently being done on NC 44, which will become the Goldsboro Bypass upon completion. 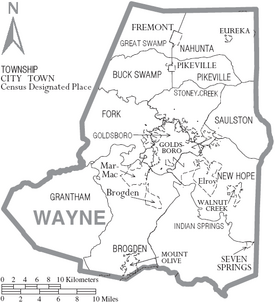 Wayne County's local industries are involved in a range of operations from simple assembly to complex manufacturing processes resulting in products ranging from bread and poultry feed to automobile parts and electric transformers. Substantial technological improvements in recent years involving modernization of plant facilities and the addition of sophisticated manufacturing equipment have resulted in enhanced profitability and productivity for many of the local manufacturing firms.

The combination of a mild climate, a freeze-free growing season of about 225 days and a wide range of soil types contribute to a highly productive agricultural area. Total gross farm sales in Wayne County in 2006 was approximately US$329,082,138. Field crops, including the primary crops of tobacco, corn, cotton, soybeans, and wheat accounted for nearly 12% of the farm income or US$38,583,389.

Seymour Johnson Air Force Base is home to the 4th Fighter Wing and 916th Air Refueling Wing. The annual civilian and military payroll is over $282 millionUSD. In fiscal year 2006 the economic impact at the base totaled over $460 millionUSD.

All content from Kiddle encyclopedia articles (including the article images and facts) can be freely used under Attribution-ShareAlike license, unless stated otherwise. Cite this article:
Wayne County, North Carolina Facts for Kids. Kiddle Encyclopedia.