Duplin County is a county located in the U.S. state of North Carolina. As of the 2010 census, the population was 58,505. Its county seat is Kenansville.

The county was formed in 1750 from New Hanover County. It was named for Thomas Hay, Viscount Dupplin, later 9th Earl of Kinnoull.

In 1784 the western part of Duplin County became Sampson County.

One of Duplin's favorite sons, John Miller, was a postmaster and merchant in Duplin. He migrated to Leon County, Florida, with other North Carolinians in the 1830s-1840s and established a successful cotton plantation called Miccosukee Plantation. 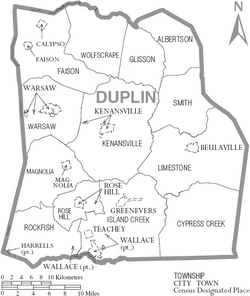 Duplin County is important in raising animals for food. It has more hogs than any other county in the United States—2.2 million in 1998, which is greater than the hog population of most states. The county is also the home to a major chicken and turkey industry.

Duplin is also home to Duplin Winery, the oldest winery in North Carolina and the largest winery in the Southeast.

All content from Kiddle encyclopedia articles (including the article images and facts) can be freely used under Attribution-ShareAlike license, unless stated otherwise. Cite this article:
Duplin County, North Carolina Facts for Kids. Kiddle Encyclopedia.