The county was formed in 1779 from the southwestern part of Craven County. It was named for Willie Jones, a planter, slaveholder, Revolutionary leader and president of the North Carolina Committee of Safety during the war. He opposed state ratification of the United States Constitution.

The rural Low Country county was originally developed for plantations, which were dependent on the labor of enslaved African Americans.

Jones County lies 8 miles west of the Atlantic Ocean but the only waterfront areas in the county are along the Trent and White Oak rivers. Part of the Great Dover Swamp also lies within the county lines. Many enjoy boating and fishing activities as well as camping at the 17 Family Campground along Highway 17 north in Maysville. The Croatan National Forest offers hiking trails and wildlife viewing and the wide open spaces of fields and forests are a haven for outdoors men. 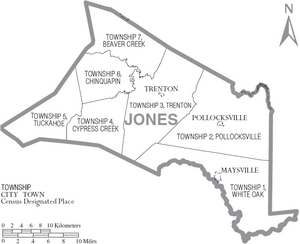 The county is divided into seven townships, which are both numbered and named:

All content from Kiddle encyclopedia articles (including the article images and facts) can be freely used under Attribution-ShareAlike license, unless stated otherwise. Cite this article:
Jones County, North Carolina Facts for Kids. Kiddle Encyclopedia.