Kids Encyclopedia Facts
Not to be confused with Lenoir, North Carolina.

Lenoir County is a county in the U.S. state of North Carolina. As of the 2020 Census, its population was 55,122. Its county seat is Kinston, located on the Neuse River, across which the county has its territory.

The county was formed by European Americans in 1791 from the southern part of Dobbs County. It was named for William Lenoir (1751-1839), an officer in the American Revolutionary War who took part in the Battle of Kings Mountain. He was a prominent political leader; when the county was established, he was serving as Speaker of the North Carolina Senate. 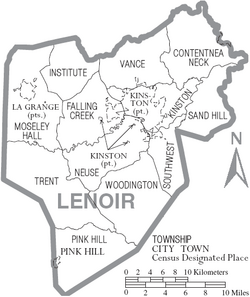 Lenoir County is served by the Kinston Regional Jetport (IATA: ISO, ICAO: KISO) with service to Orlando, Florida. Raleigh-Durham International Airport is the closest major airport with service to more than 45 domestic and international destinations.

The main highway in the county is US 70, which offers access to the North Carolina coast and I-95. Other highways that run through the county include US 258, NC 11, NC 58, NC 903 and NC 55. Interstate 95 is the closest Interstate Highway to the county, located 50 miles west in Selma.

The county is served by Greyhound with a location in Kinston.

Neuse Regional Library serves the residents of Lenoir, Greene, and Jones counties. With eight different locations, the library system offers services such as 3D printing and an inter-library loan system, as well as an eLibrary.

All content from Kiddle encyclopedia articles (including the article images and facts) can be freely used under Attribution-ShareAlike license, unless stated otherwise. Cite this article:
Lenoir County, North Carolina Facts for Kids. Kiddle Encyclopedia.