CSS Neuse was a steam-powered ironclad ram of the Confederate States Navy that served in the latter part the American Civil War and was eventually scuttled to avoid capture by rapidly advancing Union Army forces. In the early 1960s, she produced approximately 15,000 artifacts from her raised lower hull, the largest number ever found on a recovered Confederate vessel. The remains of her lower hull and a selection of her artifacts are on exhibit in Kinston, North Carolina at the CSS Neuse Interpretive Center State Historic Site, which belongs to the North Carolina Department of Natural and Cultural Resources. The ironclad is listed on the National Register of Historic Places.

A contract for the construction of Neuse was signed on 17 October 1862 between the shipbuilding company of Thomas Howard and Elijah Ellis and the Confederate Navy. Work began in October of that year on the bank across the Neuse River (her namesake) from the small village of Whitehall, North Carolina (present day Seven Springs). The gunboat's design was virtually identical to her sister ironclad CSS Albemarle, but Neuse differed from Albemarle by having four additional gun ports added (for a total of ten) to her eight-sided armored casemate. The hull was 158 feet (48 m) long by 34 feet (10 m) wide, and she was constructed mostly of locally abundant pine, with some 4 inches (100 mm) of oak used as sturdy backing for her 4-inch-thick (100 mm) wrought iron armor. Many delays in construction were incurred by a lack of available materials, mostly the iron plate for her armored casemate and deck; her deck armor was finally left off so the ironclad could be completed and put in service. Due to continuing iron plate shortages, Neuse became the first of several Southern ironclads built with unarmored decks. This situation was compounded by the Confederate Army exercising priority over the Navy in the use of the South's inadequate railroad system for transporting vital war materiel.

Neuse was equipped with two 6.4-inch (160 mm) Brooke rifled cannon (similar to a Parrott rifle); each double-banded cannon weighed more than 12,000 pounds (5,400 kg) with its pivot carriage and other attached hardware. Both cannons were positioned along the ironclad's center-line in the armored casemate, one forward, the other aft. The field of fire for both pivot rifles was 180-degrees, from port to starboard: Each cannon could fire from one of five gun port positions or could deliver a two cannon broadside. Neuse's projectiles consisted of explosive shells, anti-personnel canister shot, grape shot, and blunt-nosed, solid wrought iron "bolts" for use against Union armored ships; many examples of all four types were recovered from her raised wreck.

Launched in November 1863 while still needing fitting out, Neuse finally got up steam in April 1864 for duty on the inland waters of North Carolina as part of the force under Commander R. F. Pinkney, CSN. Shortly thereafter, the ironclad grounded off Kinston due to her mostly inexperienced crew, which had been conscripted from the Confederate Army; she remained fast in the mud for almost a month until finally being refloated. After that, due to a lack of available Confederate Army shore support, she never left the river area around Kinston, serving instead as a floating ironclad fortification. In March 1865, with Kinston under siege by Union forces, gunpowder trails were laid down which led to a cache of explosives placed in her bow; the crew then lit fires astern and amidships, and she was destroyed a short time later by fire, then a bow explosion. Neuse burned to just below her waterline and then sank into the river mud preventing capture by the rapidly advancing Union Army forces, commanded by Major General John M. Schofield. At some point following the war, her sunken hulk, lying in shallow river water and mud, was salvaged of its valuable metals: cannon, carriages and their fittings, anchors, iron ram, casemate armor, both propellers and their shafts, and her steam power plant. Whatever bits and pieces remained, including her projectiles, lay undisturbed in and around the wreck until Neuse was raised nearly a century later.

After nearly a century, the remaining lower hull of the ironclad was discovered and then raised in 1963; approximately 15,000 shipboard artifacts were recovered and carefully cataloged. Neuse's hull was then temporarily installed in the Governor Caswell Memorial, beside the river, in Kinston. Since 2013, Neuse and her artifacts have been on display in a new, climate-controlled building in downtown Kinston.

A replica of the CSS Neuse, better known as CSS Neuse II, was the brainchild of Kinston activist and businessman Ted Sampley and built by Alton Stapleford. Neuse II is on grounds display at a separate site in Kinston and contains a complete fitted-out interior that shows all shipboard details; she was constructed by volunteers from 2002 to 2009. Neuse is the only Confederate ironclad that has a historic, full-size replica on display. 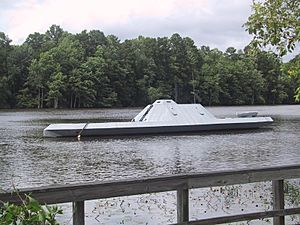 Replica of CSS Albemarle in 2003

Since April 2002 Neuse's sister ironclad, CSS Albemarle has had a 3⁄8 scale replica, 63 feet (19 m) long, at anchor near the Port O' Plymouth Museum in Plymouth, North Carolina. This ironclad replica is self-powered and capable of sailing on the river.

All content from Kiddle encyclopedia articles (including the article images and facts) can be freely used under Attribution-ShareAlike license, unless stated otherwise. Cite this article:
CSS Neuse Facts for Kids. Kiddle Encyclopedia.