In 2009, it was announced that Kinston was a recipient of the prestigious All-America City Award. This marks the second time in twenty years the city has won the title, the last time being in 1988. 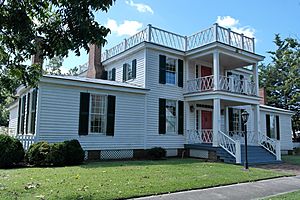 At the time of English settlement, the area was inhabited by the Neusiok Indians. Preceding the historic tribe, indigenous peoples of a variety of cultures had lived in the area for thousands of years. Before the English colonists established the city, they called the area Atkins Bank, referring to a bluff once owned by Robert Atkins just above the Neuse River. Atkins Bank was the site of farms, a tobacco warehouse, and a Church of England mission.

Kinston was created by an act of the North Carolina General Assembly in December 1762 as Kingston, in honor of King George III who had just recently ascended to the throne. The bill to incorporate it was introduced by Richard Caswell, who made his home there and later served as the first Governor of the State of North Carolina from 1776 to 1780. After victory in the American Revolution, the citizens renamed the city Kinston in 1784 to show the population's disavowal of royalty. In 1833, Kinston briefly became Caswell, in honor of governor Richard Caswell, but the name was reverted to Kinston the following year.

Commissioners appointed to design the town began to accept "subscriptions" for numbered lots. To keep a lot, subscribers were required to build brick homes of specific dimensions within three years or lose their rights to the property. The town was laid out with border streets named East, North, and South, with the western border the Neuse River. The two principal roads within these borders were named for King George and Queen Charlotte. They remain King and Queen Street to this day. Other streets were named in honor of Governor Dobbs (later renamed Independent Street) and the commissioners.

In December 1791, an act was passed in the General Assembly to abolish Dobbs County and form Lenoir and Glasgow counties. At that time, Kinston was designated the county seat for Lenoir County.

Throughout this period, Kinston was an unincorporated town. It finally became incorporated through an act of the legislature in January 1849. Following incorporation, the population grew rapidly. In 1850, the population was estimated at 455 people, and just ten years later, it had more than doubled to over one thousand.

During the onset of the American Civil War, Camp Campbell and Camp Johnston were established near the city as training camps, and a bakery on Queen Street was converted to produce hardtack in large quantities. There was also a factory for the production of shoes for the military located in Kinston. The Battle of Kinston took place in and around the city on December 14, 1862.

The Battle of Wyse Fork aka 'Battle of Southwest Creek' (March 7–10, 1865) also occurred very near the city. It was at this later battle that the Confederate Ram Neuse was scuttled to avoid capture by Union troops. Remnants of the ship have been salvaged, and are on display at Richard Caswell Park on West Vernon Ave. A climate-controlled museum has been built on downtown Queen Street, and has moved the hulk there to prevent further deterioration of the original ship's remains. A full-scale replica vessel (Ram Neuse II) has been constructed near the original's resting place (known as the "Cat's Hole") beside the bank of the Neuse River on Heritage St. in Kinston. Union Army forces occupied the city following the battle.

United States troops were assigned to the area through the Reconstruction Era.

Despite the hardships of war and Reconstruction, the population of the city continued to grow. By 1870, the population had increased to eleven hundred people and grew to more than seventeen hundred within a decade.

During the late nineteenth century, there was expansion into new areas of industry, most notably the production of horse-drawn carriages. Kinston also became a major tobacco and cotton trading center. By the start of the twentieth century, more than five million pounds of tobacco were being sold annually in Kinston's warehouses. Along with the growth in population and industry was a growth in property values. Some parcels increased in value more than fivefold within a twenty-year period.

New industries were founded, including lumber and cotton mills, as North Carolina businessmen invested in processing their own crops. Professional sports was introduced in the form of a minor league baseball team. Later growth would come in the form of a DuPont plant for the manufacture of polyester fibers, and manufacturing plants for pharmaceuticals. Growth finally slowed following the 1960s, with the shift in textile production overseas. Efforts to reinvigorate the economy through various means have had limited success.

There were 9,829 households out of which 28.0% had children under the age of 18 living with them, 35.7% were married couples living together, 22.7% had a female householder with no husband present, and 38.2% were non-families. 34.5% of all households were made up of individuals and 16.4% had someone living alone who was 65 years of age or older. The average household size was 2.29 and the average family size was 2.94.

As with most of North Carolina, Kinston is predominately Protestant with large concentrations of Baptists, Methodists, and various other evangelical groups. Episcopalians, Presbyterians, and Disciples of Christ also constitute a significant portion of the population.

The Roman Catholic community in Kinston has seen steady growth over the years with the migration of Hispanic workers to the area. Also, Catholic migrants have also come from the northeastern United States who work for the North Carolina Global TransPark and in nearby Greenville, North Carolina.

Kinston at one time had a sizeable Jewish community. As with most Jewish communities in the rural South, it has seen a steady decline. Temple Israel, Kinston's only synagogue, has only 20 members (families) and does not have a rabbi.

Heritage Place, a regional access for The NC Department of Archives, is located in the rear of Lenoir Community College's Library. It houses a large collection of local and regional family histories, numerous books on local, state, and US history, newspapers, etc. Plans are currently underway change operating hours to include Saturdays and some evenings. This is a wonderful repository for your family's genealogical records. The Neuse Regional Library system is headquartered in Kinston and operates branches in Kinston, LaGrange, Pink Hill, as well as locations in Greene and Jones Counties.

The CSS Neuse, listed on the National Register of Historic Places, and Caswell Memorial house the remains of the hull of the Confederate ironclad. A video detailing the history of the CSS Neuse is available for viewing at the Caswell Memorial. The Lenoir County Confederate Memorial, the Caswell family cemetery, and the Lenoir County Korean and Vietnam War Memorial are located at the site. There is also a Civil War Trails marker.

The Cultural Heritage Museum (CHM) was organized in the winter of 2000 on South Queen Street as a new economic development catalyst for Kinston, Lenoir County and eastern North Carolina. The heritage tourism project was created to recognize the contributions of African Americans in numerous fields. It pays tribute to the more than 200,000 black soldiers and 7,000 white officers of the United States Colored Troops who fought with the Union forces in the American Civil War. It also honors black military veterans from all wars, Carl Long and the Negro Baseball League players, local heroes, and Africa and Black History in general. The CHM intends to generate jobs and promote economic expansion opportunities.

One of Kinston's most notable and beautiful facilities is Grainger Hill Performing Arts Center or GPAC. This historic edifice has been restored and is host to national and local theater groups and performances. It is available for bookings.

Kinston is also home to notable restaurants and Mother Earth Brewing & Spirits. Kings BBQ is located on Highway 70 East near Lenoir Community College and has been a popular stop among locals and for people traveling to the beach for decades. The James Beard Award Winning Restaurant Chef & the Farmer started by Vivian Howard and Ben Knight is located in downtown Kinston. The PBS reality cooking show, A Chef's Life, focuses on the restaurant, owners, and local farmers like Brothers Farm. The Barn steakhouse and The Baron and the Beef are both fine dining establishments featuring locally sourced produce and meats on their menus and supporting sustainable agriculture. Also a proponent of sustainable practices and local ingredients, Mother Earth Brewing was founded in Kinston in the summer of 2008. Other businesses include Buy Local Gallery, The Overland Gallery, Ginger 108, Olvera Street Tacos, Boiler Room Oysters and Burgers, O'Neil Bed and Breakfast, The Bentley B&B, and Lenoir County Farmers Market.

Since 1882, The Kinston Free Press has been published in Kinston.

Kinston's Grainger Stadium is home to the Down East Wood Ducks, a Class A-Advanced Minor League Baseball team of the Carolina League that will begin play in 2017. It was previously home to the Kinston Indians minor league baseball team as well as youth and college level baseball tournaments. The town first hosted professional baseball in 1908, and among the many alumni is Rick Ferrell who was inducted into the Baseball Hall of Fame, Manny Ramirez and Lonnie Chisenhall.

The Kinston Drag Strip hosts a variety of motor sports events throughout the year. Kinston has three golf courses: the Kinston Country Club, Falling Creek Country Club, and Bill Fay Park Par 3 Golf Course. Barnet Park is home to Kinston Disc Golf. Fairfield Park has the Sprayground. The "Galaxy of Sports" is a recreational facility including a bowling alley, skating rink, and a health club. As of 2012, Woodmen of the World constructed the Woodmen of the World Community Center, complete with three water slides, an olympic sized swimming pool, several corporate reception areas and conference rooms, as well as a quarter-mile elevated track and several sporting courts.

In 1956, Kinston was the site of a rare, perfect game of billiards, as Willie Mosconi sank 150 balls in a row in one inning against Jimmy Moore.

The city contains the following parks:

All content from Kiddle encyclopedia articles (including the article images and facts) can be freely used under Attribution-ShareAlike license, unless stated otherwise. Cite this article:
Kinston, North Carolina Facts for Kids. Kiddle Encyclopedia.