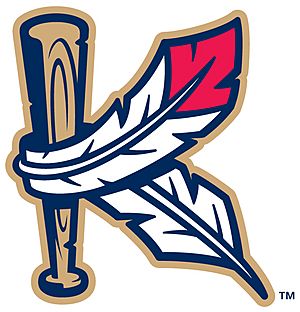 The Kinston Indians were a Minor league baseball team in Kinston, North Carolina. The team played in the Carolina League From (1956–1957, 1962–1974 and 1978–2011). Professional baseball in Kinston started in 1908, and there have been many teams since then. 2007 is the twenty-first season that the Kinston team has been known as the Indians. Before that they were known as the Eagles and the Blue Jays. The Indians, or K-Tribe as they are nicknamed, play their home games in Grainger Stadium. The Indians' mascot is a dog named Scout.

For the 2012 season, The Indians moved to Zebulon, North Carolina to become the Carolina Mudcats. The team still plays in the Carolina League.

All content from Kiddle encyclopedia articles (including the article images and facts) can be freely used under Attribution-ShareAlike license, unless stated otherwise. Cite this article:
Kinston Indians Facts for Kids. Kiddle Encyclopedia.