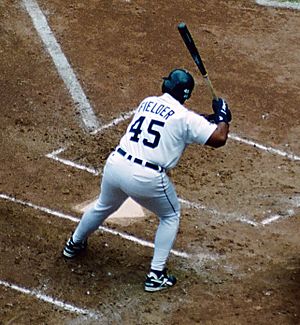 Cecil Grant Fielder (born September 21, 1963 in Los Angeles, California) was a Major League Baseball player for 14 years in the 1980s and 1990s. He attended college at the University of Nevada, Las Vegas (UNLV).

He is the father of Texas Rangers first baseman Prince Fielder, who was also known as a strong hitter during his career.

All content from Kiddle encyclopedia articles (including the article images and facts) can be freely used under Attribution-ShareAlike license, unless stated otherwise. Cite this article:
Cecil Fielder Facts for Kids. Kiddle Encyclopedia.