Hurricane Fran was a hurricane during the 1996 Atlantic hurricane season. This storm caused over $3 billion in damage. It killed 20-30 people. Fran struck North Carolina as a strong Category 3 hurricane with winds of 115 miles per hour (185 km/h). The name Fran was later retired and replaced by Fay for the 2002 Atlantic season. 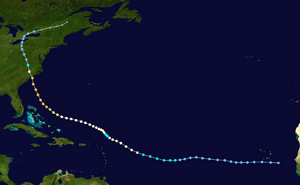 Hurricane Fran started from a tropical wave that moved off the western coast of Africa, entering the Atlantic Ocean, on August 22. The low pressure area became a tropical depression on August 23. Little changed for several days. By August 26, the storm had been disorganized. 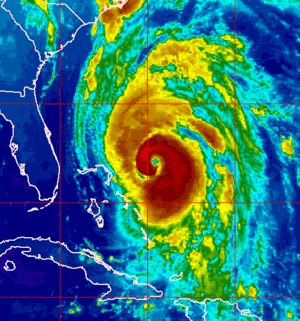 On September 6, the storm hit North Carolina with winds of 115 miles per hour (185 km/h). Once on land, the storm rapidly weakened. It moved through Virginia. It died on September 8.

A Hurricane Watch was issued in the Lesser Antilles in late August. As Fran moved away, the watch was ended.

All content from Kiddle encyclopedia articles (including the article images and facts) can be freely used under Attribution-ShareAlike license, unless stated otherwise. Cite this article:
Hurricane Fran Facts for Kids. Kiddle Encyclopedia.