Greenville has no relation to Greene County. For the neighboring county that Greenville is in, see Pitt County.

Greene County is a county located in the U.S. state of North Carolina. As of the 2010 Census, the population was 21,362. Its county seat is Snow Hill.

Greene County, being a part of land grant by King Charles II of England in 1663, was first settled around 1710 by immigrants from Maryland, Virginia, and parts of North Carolina. The original inhabitants of the area, the Tuscarora Indians, fought with these immigrants and on March 20–23, 1713, a fighting force of South Carolinians and Yemassce Indians, under Colonel Murice Moore, defeated the Tuscarora, under the leadership of Chief Hancock. This was the final major battle of the Tuscarora War at Fort Neoheroka near current day Snow Hill.

In 1758, the area now recognized as Greene and Lenoir Counties was separated from Johnston and named Dobbs for the Royal Governor. The county was formed in 1791 from the northern part of Dobbs County. It was originally named Glasgow County, for James Glasgow, North Carolina Secretary of State from 1777 to 1798. In 1799, Glasgow's involvement in military land grant frauds forced him to resign and leave the state. Glasgow County was then renamed Greene County in honor of Nathanael Greene, one of General Washington's right-hand men.

The county seat, Snow Hill, is the largest town and major commercial center in the county. The town draws its name from the historic white sandy banks of nearby Contentnea Creek. 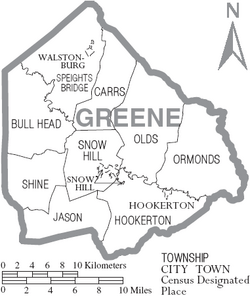 All content from Kiddle encyclopedia articles (including the article images and facts) can be freely used under Attribution-ShareAlike license, unless stated otherwise. Cite this article:
Greene County, North Carolina Facts for Kids. Kiddle Encyclopedia.