Greene County is a county located on the eastern border of the U.S. state of Tennessee. As of the 2010 census, the population was 68,831. Its county seat is Greeneville, and the current county mayor is Kevin C. Morrison (R).

After the United States became independent, Greene County was formed in 1783 from the original Washington County, North Carolina, part of the former Washington District. The county is named for Major General Nathanael Greene (1742-1786), a major general in the Continental Army from Rhode Island. John Crockett, father of Davy Crockett, and his wife settled in the county near Limestone. Davy was born there in 1786. At the time, the area was part of the extra-legal state Franklin.

Greene County is the home of Tusculum College, the oldest college in Tennessee; the state's oldest Methodist congregation (the Ebenezer Methodist Church, near Chuckey), and the state's second oldest continuously cultivated farm (Elmwood Farm, part of the Earnest Farms Historic District). Revolutionary War veteran, and state legislator, Col. Joseph Hardin made Greene County his home for a period of time, serving as justice of the peace and as one of the original trustees of Tusculum (then Greeneville) College.

As with yeomen farmers in much of East Tennessee, those in Greene County were generally Unionist and opposed to secession on the eve of the Civil War. In Tennessee's Ordinance of Secession referendum on June 8, 1861, Greene Countians voted against secession by a vote of 2,691 to 744. Following the vote (the call for secession was passed statewide), the second session of the East Tennessee Convention convened in Greeneville. It called for a separate, Union-aligned state to be formed in East Tennessee.

A railroad bridge near Mosheim was among those destroyed by the East Tennessee bridge-burning conspiracy in November 1861. Several of the conspirators who had taken part in the burning of this bridge were later captured and executed by Confederate supporters, including Jacob Hensie, Henry Fry, Jacob and Henry Harmon, and noted local potter Alex Haun.

According to the U.S. Census Bureau, the county has a total area of 624 square miles (1,620 km2), of which 622 square miles (1,610 km2) is land and 2.0 square miles (5.2 km2) (0.3%) is water. Most of Greene County is located within the Ridge-and-Valley Appalachians, a range characterized by long, narrow ridges alternating with similarly-shaped valleys. Bays Mountain, a prominent ridge in this range, forms much of Greene's northern border with Hawkins County. The extreme southeastern part of Greene County is located within the Blue Ridge Mountains, specifically a subrange of the Blue Ridge known as the Bald Mountains. This range straddles Greene's border with North Carolina, and includes the county's two highest points: Gravel Knob, which rises to over 4,840 feet (1,480 m), and 4,844-foot (1,476 m) Camp Creek Bald (it's uncertain which is higher due to lack of an exact measurement for Gravel Knob's elevation).

Greene County is drained by the Nolichucky River, which traverses the southern half of the county. This river is impounded by Nolichucky Dam south of Greeneville, creating Davy Crockett Lake. 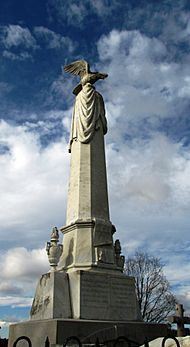 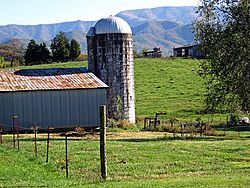 Public schools in Greene County school system include the following, with their enrollments for the 2007–2008 school year:

Public schools that are within Greene County but are part of the Greeneville City School System include:

All content from Kiddle encyclopedia articles (including the article images and facts) can be freely used under Attribution-ShareAlike license, unless stated otherwise. Cite this article:
Greene County, Tennessee Facts for Kids. Kiddle Encyclopedia.