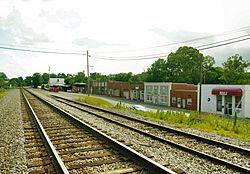 Limestone is an unincorporated community on the western border of Washington County and the eastern border of Greene County in the northeastern part of the U.S. state of Tennessee. Its zip code is 37681. Limestone is part of the Johnson City Metropolitan Statistical Area, which is a component of the Johnson City–Kingsport–Bristol, TN-VA Combined Statistical Area – commonly known as the "Tri-Cities" region.

Washington College Academy was founded in Limestone in 1780 by Rev. Samuel Doak, and was the first institution to bear the name of the first American president. Limestone was the birthplace of David Crockett (1786) to John and Rebecca Crockett. The Gillespie House, built in 1792 by pioneer settler George Gillespie, still stands in Limestone. One of the locations used in the TV movie Goodbye, Miss 4th of July (1988) was the Old Stone House in Limestone.

Limestone has its own post office and ZIP code (37681). The post office is located at 359 Opie Arnold Road, Limestone, Tennessee 37681, in the Washington County portion of the community.

Davy Crockett Birthplace State Park is located in the western portion of Limestone. The park provides camping, picnicking and other recreational activities, and includes a replica of Crockett's birth cabin and a small museum.

All content from Kiddle encyclopedia articles (including the article images and facts) can be freely used under Attribution-ShareAlike license, unless stated otherwise. Cite this article:
Limestone, Tennessee Facts for Kids. Kiddle Encyclopedia.