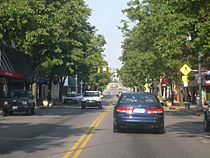 Bristol is a city in Sullivan County, Tennessee, United States. Its population was 26,702 at the 2010 census. It is the twin city of Bristol, Virginia, which lies directly across the state line between Tennessee and Virginia. The boundary between the two cities is also the state line, which runs along State Street in their common downtown district. Bristol is a principal city of the Kingsport−Bristol−Bristol, TN-VA metropolitan statistical area, which is a component of the Johnson City−Kingsport−Bristol, TN-VA combined statistical area − commonly known as the "Tri-Cities" region.

Bristol is probably best known for being the site of some of the first commercial recordings of country music, showcasing Jimmie Rodgers and the Carter Family, and later a favorite venue of mountain musician Uncle Charlie Osborne. The U.S. Congress recognized Bristol as the "Birthplace of Country Music" in 1998, and the Birthplace of Country Music Museum is located in Bristol. It also is the birthplace of Tennessee Ernie Ford.

Bristol is also the site of Bristol Motor Speedway, a NASCAR short track that is one of the best-known motorsports facilities in the country.

The world's fifth-largest coal producer, Contura Energy, is based in Bristol.

In 1927 record producer Ralph Peer of Victor Records began recording local musicians in Bristol, to attempt to capture the local sound of traditional "folk" music of the region. One of these local sounds was created by the Carter Family, which got its start on July 31, 1927, when A.P. Carter and his family journeyed from Maces Spring, Virginia, to Bristol to audition for Ralph Peer, who was seeking new talent for the relatively embryonic recording industry. They received $50 for each song they recorded. That same visit by Peer to Bristol also resulted in the first recordings by Jimmie Rodgers.

Since 1994, the Birthplace of Country Music Alliance has promoted the city as a destination to learn about country music and the city's role in the creation of an entire music genre. Currently, the Alliance is organizing the building of a new Cultural Heritage Center to help educate the public about the history of country music in the region.

Every year, during the third weekend in September, a music festival called the Bristol Rhythm & Roots Reunion takes place. The festival is held downtown, where Tennessee and Virginia meet, and it celebrates Bristol's heritage as the Birthplace of Country Music.

Bristol features a humid subtropical climate with warm to hot summers and short, chilly winters. Due to the elevation of the city, Bristol does not quite experience the hot summers seen in other parts of the South and its winters are colder than many other cities in the region. Bristol on average sees roughly 40 inches of precipitation per year. Snow does occasionally fall in the city, as the city averages roughly 15 inches of snow annually. 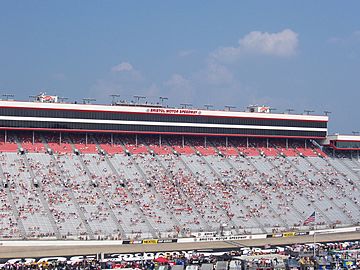 Bristol is the location of Bristol Motor Speedway, a motorsports venue that hosts several NASCAR events. It is also home to Bristol Dragway, which hosts the Ford Thunder Valley Nationals, an NHRA national event.

A Pittsburgh Pirates rookie Minor League Baseball affiliate, the Bristol Pirates, played its home games at DeVault Memorial Stadium in Bristol, Virginia, from 1969 to 2020. In conjunction with a contraction of Minor League Baseball beginning with the 2021 season, the Appalachian League, in which the Pirates played, was reorganized as a collegiate summer baseball league, and the Pirates were replaced by a new franchise in the revamped league designed for rising college freshman and sophomores.

All content from Kiddle encyclopedia articles (including the article images and facts) can be freely used under Attribution-ShareAlike license, unless stated otherwise. Cite this article:
Bristol, Tennessee Facts for Kids. Kiddle Encyclopedia.