Sullivan County is a county located in the U.S. state of Tennessee. As of the 2010 census, the population was 156,823. Its county seat is Blountville.

Sullivan is Tennessee's second-oldest county, having been established in 1779 when the area was still part of North Carolina. It was part of the extra-legal State of Franklin from 1784 to 1788.

Sullivan County was created in 1779 from a portion of Washington County, and named for John Sullivan, a general in the Revolutionary War. Long Island of the Holston in Kingsport had been an important landmark for the Cherokee. The island was the site of Fort Robinson, constructed in 1761 following the fall of Fort Loudoun further to the south, making the Sullivan area one of the earliest settled areas of Tennessee.

Sullivan County was one of the few East Tennessee counties to support secession on the eve of the Civil War. In Tennessee's June 1861 referendum, the county voted 1,586 to 627 in favor of secession.

According to the U.S. Census Bureau, the county has a total area of 430 square miles (1,100 km2), of which 413 square miles (1,070 km2) is land and 16 square miles (41 km2) (3.8%) is water. The western portion of the county lies within the Ridge-and-Valley Appalachians, which are characterized by long, narrow ridges roughly oriented northeast-to-southwest. The northeastern end of Bays Mountain, part of the Ridge-and-Valley range, rises southwest of Kingsport. The eastern portion of the county lies within the Blue Ridge Mountains. Holston Mountain, which at 4,284 feet (1,306 m) is the highest point in Sullivan, straddles the county's eastern boundary with Johnson County.

Morrell Cave (also known as Worleys Cave) is a Tennessee State Natural Area. The cave has a surveyed length of 4.4 miles (7.1 km), making it the second longest cave in East Tennessee and the 177th longest cave in the United States. Morrell Cave is located on the south side of the Holston River, 2.5 miles (4.0 km) east of Bluff City. During the Civil War, the cave was a major source of saltpeter, the main ingredient of gunpowder. Significant evidence of this mining activity remains in the cave, including evidence of large amounts of saltpeter-bearing dirt that were removed, pick marks in the dirt, and an elaborate system of trails used by the miners. Cave historian Marion O. Smith has determined that there were two companies of the Confederate Nitre and Mining Bureau, District No. 7, that were active in Sullivan County. 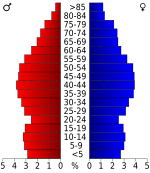 All content from Kiddle encyclopedia articles (including the article images and facts) can be freely used under Attribution-ShareAlike license, unless stated otherwise. Cite this article:
Sullivan County, Tennessee Facts for Kids. Kiddle Encyclopedia.