Blountville is a census-designated place (CDP) in and the county seat of Sullivan County, Tennessee, United States. The population was 3,074 at the 2010 census. It is the only Tennessee county seat not to be an incorporated city or town.

The area that is now Blountville is thought to have been the location of a longhunter fort prior to its permanent settlement. The site of the town was part of a tract of about 600 acres (240 ha) of land bought by James Brigham in 1782. In 1792 Brigham gave 30 acres (12 ha) to Sullivan County for use as a county seat and established a hotel nearby. Blountville was laid off as a town and established as the county seat in 1795. The county's first courthouse and jail was a log structure. In 1825 it was replaced with a brick building. By 1830, the settlement had 209 residents, two churches, six stores, two taverns, ten mechanics, one doctor, and one lawyer.

On the afternoon of September 22, 1863, during the Civil War, the town was the scene of the four-hour-long Battle of Blountville. During a major expedition into East Tennessee and Southwest Virginia, a Union Army unit attacked Confederate troops at Blountville. The town was shelled in the fighting and the courthouse was burned in the battle, which forced the Confederates to withdraw. The courthouse was rebuilt within the old walls in 1866. The current courthouse dates from a major construction that was done in 1920; it also includes additions made in 1958.

If Blountville were an incorporated town, it would qualify as the second oldest municipality in Tennessee (second only to Jonesborough); however, it was unincorporated at one point in order to avoid having redundant government services for such a small area and population. This unique status has led to some odd results, including a lawsuit in which it was ruled that neighboring Kingsport was not allowed to annex areas of Sullivan County within a defined distance of the courthouse, in effect ensuring that the county seat could not be annexed out of existence.

Several of Blountville's surviving 18th and 19th century buildings are included in an historic district listed on the National Register of Historic Places. The Deery Inn was built in the late 1700s and consists of three buildings: a two story log home, a three story stone house and a two story frame building. All buildings are next to each other and attached. The home is a private residence.

According to the United States Census Bureau, the CDP has a total area of 4.9 square miles (13 km2), all land. 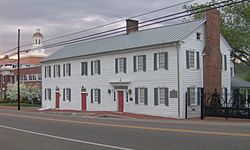 Blountville is the site of the Tri-Cities Regional Airport, located in Blountville primarily because of its central location between Johnson City, Kingsport, Bristol, TN/VA. NASCAR champion Alan Kulwicki died in an airplane crash near Blountville.

Blountville's historic district includes two 18th-century buildings— the Old Deery Inn and the Anderson Townhouse— and several notable 19th-century structures. Appalachian Ghost Walks— a ghost tour company that specializes in the "haunted" history of the Appalachian Mountains— has established a ghost tour of Blountville's historic district. The Big Hollow Par 3 Golf Course, Factory Stores of America, and Country Side Vineyard and Winery are all located in the Blountville vicinity. Appalachian Caverns— the largest show cave in East Tennessee— and Boone Lake are located just south of Blountville.

All content from Kiddle encyclopedia articles (including the article images and facts) can be freely used under Attribution-ShareAlike license, unless stated otherwise. Cite this article:
Blountville, Tennessee Facts for Kids. Kiddle Encyclopedia.