Jonesborough (historically also Jonesboro) is a town in, and the county seat of, Washington County, Tennessee, in the Southeastern United States. Its population was 5,791 as of 2021. It is "Tennessee's oldest town".

Jonesborough was founded in 1779, 17 years before Tennessee became a state and while the area was under the jurisdiction of North Carolina. It was named after North Carolina legislator, Willie Jones, who had supported the state's westward expansion across the Appalachian Mountains.

The town was renamed "Jonesboro" for a period of time, but it has been changed back to the original spelling.

Jonesborough was originally a part of the Washington District. In 1784, it became the capital of the autonomous State of Franklin (ostensibly named after American founding father, Benjamin Franklin). Franklin, however, was never recognized by Congress, and was re-claimed by North Carolina in late 1788.

Jonesborough is often considered to be the center of the abolitionist movement within the states that would join the Confederacy during the American Civil War. Elihu Embree printed his publication, The Emancipator, from Jonesborough. Publication began in 1820, making The Emancipator the first American periodical to be dedicated exclusively to the issue of the abolition of slavery. While Tennessee would later join the Confederacy, most east Tennesseans had Unionist leanings. They were generally subsistence farmers and held relatively few slaves compared to landowners in Middle Tennessee or the plantation areas of the Delta near the Mississippi River.

In the 1840s, Jonesborough became the second hometown to the Jonesborough Whig, a newspaper published by William G. "Parson" Brownlow, after Brownlow relocated the paper from Elizabethton, Tennessee, where it had been in publication for approximately two years. Brownlow and rival editor/Methodist circuit rider Landon Carter Haynes brawled in the streets of Jonesborough in May 1840. Over the next several years, the two newspapermen bashed one another in their respective papers, each managing at times to thwart the other's political ambitions. Haynes left the newspaper business in 1845, and Brownlow, who later was elected as governor, moved the Whig to Knoxville in 1849. 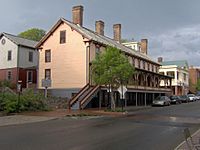 The Chester Inn, built in 1797, still stands in downtown Jonesborough

Today, Jonesborough attracts heritage tourism because of its historical status as Tennessee's oldest town and its significant historic preservation efforts that have preserved a rich architectural fabric. The town's museum describes the local heritage of tobacco farming. The historic Chester Inn, built in 1797, still stands in downtown Jonesborough. The Jonesborough Historic District was listed on the National Register of Historic Places in 1969. The oldest surviving building, the Christopher Taylor House (built in 1777 about a mile outside of the original town limits), was relocated to a lot within the historic district.

Jonesborough is the home to the International Storytelling Center, which holds the annual National Storytelling Festival on the first full weekend in October. The Festival builds on the Appalachian cultural tradition of storytelling, and has been drawing people from around the world for more than 35 years. Large tents are pitched in parks around town, and storytellers sit on stages or at the head of the main tent to perform. Occasionally, performances are interrupted for a moment by passing Norfolk Southern Railway trains. Past storytellers included Carmen Agra Deedy, Syd Lieberman, and Kathryn Tucker Windham. The festival inspired the development of a successful storytelling graduate degree program at the nearby East Tennessee State University.

According to the United States Census Bureau, the town has a total area of 4.3 square miles (11 km2), all of it land. 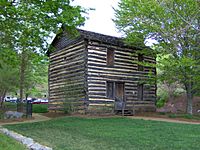 A local legend holds that the ghost of Andrew Jackson occasionally appears in the vicinity of a historic cabin in a town park.

In 1788, future U.S. president Jackson spent several months in Jonesborough awaiting a caravan. During this time, he lodged in a cabin belonging to Major Christopher Taylor, which was located about a mile outside of town. In 1974, this cabin was removed from its original spot and reconstructed in the town's park. The ghost supposedly walks up to the front door and disappears into the building. The ghost has also been reportedly seen walking down the street, in the direction of the old courthouse.

Schools located in Jonesborough include:

All content from Kiddle encyclopedia articles (including the article images and facts) can be freely used under Attribution-ShareAlike license, unless stated otherwise. Cite this article:
Jonesborough, Tennessee Facts for Kids. Kiddle Encyclopedia.