Interstate 81 is a north-south interstate in the eastern United States. It runs from Dandridge, Tennessee in the south to Wellesley Island, New York in the north; for a total distance for about 854.89 miles (1,375.81 km). It follows the Appalachian Mountains for nearly its entire length.

Interstate 81 begins in Tennessee at Interstate 40 in Dandridge. The route follows the Appalachian Mountains for much of its route through Tennessee and Virginia, serving such cities as the twin cities of Bristol, Tennessee and Bristol, Virginia, Roanoke, Blacksburg, Lexington, Staunton, Harrisonburg, and Winchester. In Harrisonburg, I-81 cuts through the James Madison University campus. It follows its older counterpart, U.S. Route 11, for its entire length in Virginia.

Interstate 81 briefly enters the eastern panhandle of West Virginia, serving the city of Martinsburg. It then crosses the state of Maryland at one of its narrowest points, passing through the "Hub City" of Hagerstown where it crosses many other routes.

Interstate 81 forms a major north–south corridor through the state of Pennsylvania, serving the boroughs of Chambersburg and Carlisle, where it meets the Pennsylvania Turnpike. But I-81 does not directly interchange with it (motorists must use US 11 to connect). Around the state capital of Harrisburg, the route forms the northeastern section of Pennsylvania's Capital Beltway. The route then travels northeast toward the Wyoming Valley, where it serves the cities of Wilkes-Barre and Scranton, then heads north through the Endless Mountains region toward the state line. Although it is signed as a north–south highway, it is distinctly northeast–southwest and occasionally east–west throughout the state.

Interstate 81 enters the state of New York near Binghamton. It follows U.S. Route 11 in a north–south direction, through much of the state. It serves the cities of Syracuse (where it intersects the New York State Thruway), and Watertown. The route ends at the Canadian border at the Thousand Islands Bridge, where it crosses the St. Lawrence River, continuing as a short connector, Highway 137, which serves the Thousand Islands Parkway and Highway 401. 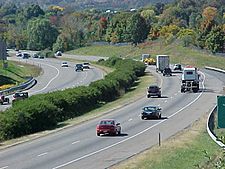 I-81 looking southbound near milepost 245 in Harrisonburg, Virginia.

The Interstate 81 Corridor Coalition, a six-state coalition, was organized to handle issues along Interstate 81, such as truck traffic and air pollution. As of October 15, 2008, this commission has met twice.

All content from Kiddle encyclopedia articles (including the article images and facts) can be freely used under Attribution-ShareAlike license, unless stated otherwise. Cite this article:
Interstate 81 Facts for Kids. Kiddle Encyclopedia.