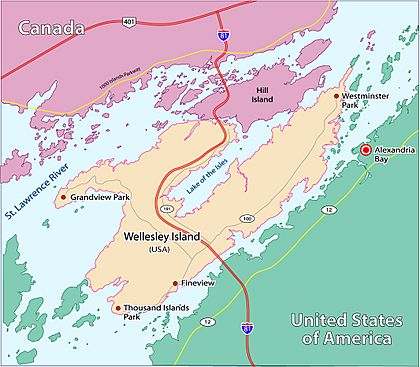 The island was named Wells Island but renamed by Captain William Fitzwilliam Owen to the current name. There is no indication whom it was named for, but likely for Richard Wellesley, 1st Marquess Wellesley.

An arterial highway, Interstate 81, crosses Wellesley Island. Five segments composing the Thousand Islands International Bridge link the island to the opposite shores of the river. Said to be "the smallest vehicular international bridge in the world," one of the bridges crosses a narrow channel, the International Rift, which separates Wellesley Island in the United States from Hill Island in Canada. The United States border-crossing facility at the port of entry is located on the northeastern part of the island.

Wellesley, one of the largest of the Thousand Islands in the St. Lawrence River, is home to a growing number of full-time residents. Population increases dramatically during the summer months. The island has two State Parks, a nature center, and three golf courses. Located on its southern tip is the Thousand Island Park Historic District, listed on the National Register of Historic Places in 1982. In addition to Interstate 81, which connects two portions of the Thousand Islands Bridge, Jefferson County Routes 100 and 191 serve the island. 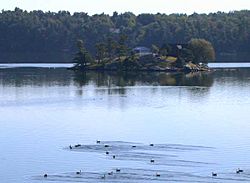 View of Dukeman's Island, located in the middle of Wellesley Island's interior Lake of the Isles

Communities on the island 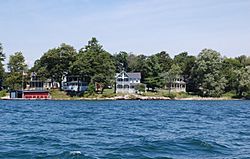 Parks on the island

All content from Kiddle encyclopedia articles (including the article images and facts) can be freely used under Attribution-ShareAlike license, unless stated otherwise. Cite this article:
Wellesley Island Facts for Kids. Kiddle Encyclopedia.