Kids Encyclopedia Facts
This page is about the southwest Virginia city of Bristol. For the northern town of Bristow, see Bristow, Virginia. 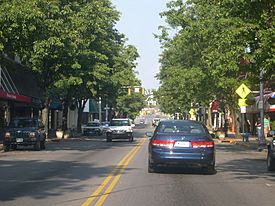 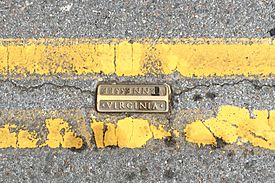 Bristol is an independent city in the Commonwealth of Virginia. As of the 2010 census, the population was 17,835. It is the twin city of Bristol, Tennessee, just across the state line, which runs down the middle of its main street, State Street. It is surrounded on three sides by Washington County, Virginia, which is combined with the city for statistical purposes. Bristol is a principal city of the Kingsport–Bristol–Bristol, TN-VA Metropolitan Statistical Area, which is a component of the Johnson City–Kingsport–Bristol, TN-VA Combined Statistical Area – commonly known as the "Tri-Cities" region.

Evan Shelby first appeared in what is now the Bristol area around 1765. In 1766, Shelby, moved his family and settled at a place called Big Camp Meet (now Bristol, Tennessee/Virginia). It is said that Cherokee Indians once inhabited the area and the Indian village was named, according to legend, because numerous deer and buffalo met here to feast in the canebrakes. Shelby renamed the site Sapling Grove (which would later be changed to Bristol). In 1774, Shelby erected a fort on a hill overlooking what is now downtown Bristol. It was an important stopping-off place for notables such as Daniel Boone and George Rogers Clark, as well as hundreds of pioneers’ en route to the interior of the developing nation. This fort, known as Shelby’s Station was actually a combination trading post, way station, and stockade.

By the mid-nineteenth century, when surveyors projected a junction of two railroad lines at the Virginia-Tennessee state line, Reverend James King conveyed much of his acreage to his son-in-law, Joseph R. Anderson. Anderson laid out the original town of Bristol, Tennessee/Virginia and building began in 1853.

Samuel Goodson, who owned land that adjoined the original town of Bristol TN/VA at its northern boundary (Beaver Creek was the dividing line), started a development known as Goodsonville. Anderson was unable to incorporate Bristol across the state lines of Tennessee and Virginia. In 1856, Goodsonville and the original Bristol, Virginia were merged to form the composite town of Goodson, Virginia.

The Grove, Solar Hill Historic District, and Walnut Grove are listed on the National Register of Historic Places.

Despite its relatively small size, Bristol, Virginia, boasts one of the more advanced broadband networks in the country. Bristol Virginia Utilities (BVU) started planning a fiber optic deployment in the city in the late 1990s. By 2001, BVU had been granted approval by the city council for a full deployment of a Fiber to the premises (FTTP or FTTU, fiber to the user) project. This project was to offer competition to local incumbents and provide broadband Internet, cable TV, and telephone service to the residents of Bristol. This deployment was one of the first of its kind in the United States and was widely watched by the telecommunications industry. A system known as Passive optical network (PON) was successfully deployed to over 6,000 customers in a matter of two years.

In 2003, in the relatively isolated city of Bristol, Virginia, Bristol Virginia Utilities (BVU), created a nonprofit offshoot called "Optinet", a municipal broadband Internet service that covers Bristol as well as the Southwest portion of the state of Virginia. Serving around 12,500 customers, BVU is recognized as the "first municipal utility in the United States to deploy an all-fiber network offering the triple play of video, voice and data services". On October 29, 2009, BVU received USD 3.5 million in grant funding from the Virginia Tobacco Indemnification and Community Revitalization Commission. With these funds BVU will build "an additional 49 miles of its OptiNet fiber-optic backbone from Abingdon up I-81 to Virginia Route 16 from Marion into Grayson County". This will also allow for BVU to make a second connection with Mid Atlantic Broadband, increasing communication between different businesses in Northern Virginia. The Virginia Tobacco Community funded this project because it provided their business with more connections in crucial areas of the southwest and southern part of Virginia.

The U.S. Department of Commerce also funded BVU. On July 3, 2010, it was reported that they gave USD 22.7 million in stimulus funds to Southwest Virginia to create a "388-mile optic backbone through an eight-county region". This project will service over 120 institutions, such as schools, hospitals, government buildings, and many more besides. This new municipals broadband service will also be within a two-mile distance of over 500 different businesses. This project also created 295 new jobs. BVU Optinet continues operate a strong municipal broadband Internet service for Bristol and many other counties in Virginia.

Today, Bristol Virginia is still one of only a few FTTP deployments in the country with a significant number of customers online. Bristol's twin city in Tennessee is deploying an FTTP system similar to its neighbor across the state line.

In 1927 record producer Ralph Peer of Victor Records began recording local musicians in Bristol to attempt to capture the local sound of traditional "folk" music of the region. One of these local sounds was created by the Carter Family. The Carter Family got their start on July 31, 1927, when A.P. Carter and his family journeyed from Maces Spring, Virginia, to Bristol, Tennessee, to audition for Peer who was seeking new talent for the relatively embryonic recording industry. They received $50 for each song they recorded.

Since 1994, the Birthplace of Country Music Alliance has promoted the city as a destination to learn about the history of the region and its role in the creation of an entire music genre. The Alliance is organizing the building of a new Cultural Heritage Center to help educate the public about the history of country music in the region.

Former NASCAR driver Kelly Denton is from the city.

According to Bristol's 2011 Comprehensive Annual Financial Report, the top employers in the city are:

The Tri-Cities Regional Airport, with approximately 195,000 annual passengers, is 19 miles to the southwest of Bristol.

Until 1970 the Southern Railway ran a couple of trains through the city, making stops at Bristol station. The last trains being the Birmingham Special and the Pelican. Until 1968 the Memphis-bound Tennessean made a stop in the city.

A local coalition began advocating for Amtrak service around 2010, and local interest grew following the extension of Northeast Regional service to Roanoke in 2017. A study in 2019 concluded that a further extension to Bristol via Wytheville and Christiansburg could be financially viable but would require $30 million in track improvements between Bristol and Roanoke. In 2020, Gov. Ralph Northam described Amtrak service to Bristol as a "logical step" but said that it would be conditional upon the replacement of the Long Bridge with a higher-throughput rail crossing of the Potomac River.

All content from Kiddle encyclopedia articles (including the article images and facts) can be freely used under Attribution-ShareAlike license, unless stated otherwise. Cite this article:
Bristol, Virginia Facts for Kids. Kiddle Encyclopedia.