Kids Encyclopedia Facts
This page is about the town. For the former plantation, see Abingdon (plantation).

Abingdon is a town in Washington County, Virginia, United States, 133 miles (214 km) southwest of Roanoke. The population was 8,191 at the 2010 census. It is the county seat of Washington County and is a designated Virginia Historic Landmark. The town encompasses several historically significant sites and features a fine arts and crafts scene centered on the galleries and museums along Main Street. 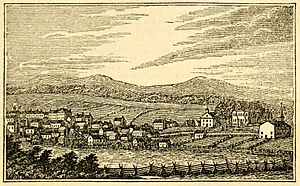 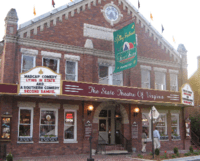 The region was long the territory of varying cultures of indigenous peoples, including the Chisca and Xualae. From the late 17th-century, it was occupied by the Cherokee Nation, whose territory extended from the present-day area of borders of Tennessee, Virginia, and Kentucky through the spine of North Carolina and later into Georgia.

Between 1748 and 1750, Dr. Thomas Walker surveyed the land where the town of Abingdon is situated. It was on the Great Road that Colonel William Byrd III ordered cut through the wilderness on to Kingsport, Tennessee. In 1760, the famed frontiersman Daniel Boone named the area Wolf Hills, after his dogs were attacked by a pack of wolves during a hunting expedition. The site of the attack is on 'Courthouse Hill'. In the twenty-first century, the town sponsored a public art event, in which artists created 27 wolf sculptures, which were installed around the town. Most were later sold at an auction to raise money for Advance Abingdon.

Between the years 1765 and 1770 James Douglas, Andrew Colville, George Blackburn, Joseph Black, Samuel Briggs and James Piper settled in and around present-day Abingdon under purchases from Dr. Thomas Walker.

During Lord Dunmore's War, Joseph Black built Black's Fort in 1774 to protect local settlers in the region from attacks by the Cherokee of the Lower Towns. It consisted of a log stockade, with a few log cabins inside, where nearby settlers took refuge in event of attack. They retreated to the fort in 1776 when attacked by the war leader Dragging Canoe and his Chickamauga Cherokee forces. Hoping to push out the colonists, the Cherokee had allied with the British in the American Revolutionary War. The settlement was known as Black’s Fort prior to being named Abingdon. Black, Briggs and Walker donated the 120 acres of land upon which the original town was laid out.

It was at the intersection of two great Indian trails, which had followed ancient animal migration trails through the mountains. It was a prime location as a trade center and access point to the west and south. In 1776 the community of Black's Fort was made the county seat of the newly formed Washington county. In 1778, Black's Fort was incorporated as the town of Abingdon, said to be named for the ancestral home of Martha Washington in Oxfordshire, England.

Possible namesakes for the town include Jake Dore's home in Abington, Pennsylvania, or Lord Abingdon, friend of settler William Campbell.

Abingdon is the final stop along the Virginia Creeper Trail, which allows pedestrian, cyclist and equestrian traffic. This trail is 35 miles long, extending from White Top Mountain through Damascus, Virginia, with the trailhead in Abingdon. The Historical Society of Washington County, Virginia, located in Abingdon, serves as a regional genealogy center, in addition to being a repository for Washington County history.

According to the United States Census Bureau, the town has a total area of 8.3 square miles (21.6 km²), all land.

The town is located in the Great Appalachian Valley, between the Middle Fork and the North Fork of the Holston River. 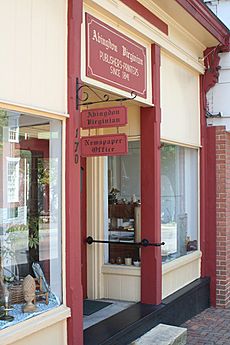 Office of the Abingdon Virginian newspaper

There were 3,522 households out of which 23.3% had children under the age of 18 living with them, 45.6% were married couples living together, 10.6% had a female householder with no husband present, and 40.6% were non-families. 36.7% of all households were made up of individuals and 14.9% had someone living alone who was 65 years of age or older. The average household size was 2.08 and the average family size was 2.72. 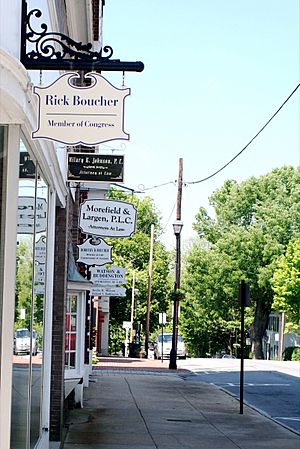 View of the street near downtown Abingdon, Virginia

All content from Kiddle encyclopedia articles (including the article images and facts) can be freely used under Attribution-ShareAlike license, unless stated otherwise. Cite this article:
Abingdon, Virginia Facts for Kids. Kiddle Encyclopedia.