Wytheville ( WITH-vil) is a town in, and the county seat of, Wythe County, Virginia, United States. It is named after George Wythe, a signer of the United States Declaration of Independence, and mentor to Thomas Jefferson. Wytheville's population was 8,211 at the 2010 census. Located at the intersection of Interstate Highways 77 and 81, the town has long been a crossroads for travelers. During the American Civil War, Wytheville had a strategic importance, and was attacked in 1863 (Toland's Raid) and 1865 (Stoneman's 1865 Raid). The town is also the birthplace of Edith Bolling Wilson, wife of President Woodrow Wilson. 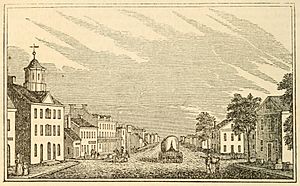 Wythe County was created in 1789 and named for George Wythe, the "father of American Jurisprudence" and signer of the Declaration of Independence. In May 1790, Chris Simmerman donated 90 acres, along with John Davis's 10 acres, to establish a town and county seat. Robert Adams completed a town survey in November of that year, dividing the area into half-acre lots. The town didn't have an official name yet, but was generally known as Wythe Court House. Two years later, in October 1792, the town was officially named Evansham, for prominent local citizen Jesse Evans. After a disastrous fire in March 1839, the town was renamed Wytheville. At that time, it was home to about 500 residents.

What started off as a few cases of infantile paralysis during the summer of 1950 swelled into the hundreds. Out of the 5,513 inhabitants of the town, 184 people contracted the disease with 17 fatalities. From the beginning of June until the end of August, parents kept children inside and large gatherings were cancelled to diminish the chance of infection.

The Town Council erected billboards at all five entrances to the county warning potential visitors of the epidemic and urging tourists to come again the following year. By the end of the summer, unknown assailants stole or demolished all five billboards. Though the Town Council offered a reward for information, no one came forward.

Wytheville is an important point on both I-77 and I-81 and lies amidst a wrong-way concurrency of I-77 and I-81. It is located about halfway between Bristol, Tennessee/Virginia and Roanoke. On the I-77 corridor, it is located about halfway between Charleston, West Virginia and Charlotte, North Carolina. The nearby community of Fort Chiswell is the control city for the northbound traffic on I-77 coming from Charlotte, Statesville, Elkin, and Mount Airy, North Carolina. In the near future, Interstate 74 will go through Wytheville in addition to the two other interstates. 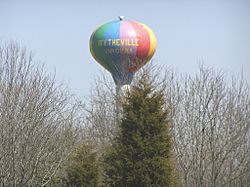 Wytheville's hot air balloon-themed water tower, inspired by the town's yearly Chautauqua Festival balloon launches, can be seen by I-81 travellers near the I-77 interchange.

Due to the confluence of I-77, I-81 and several U.S. Highways, and its location in the foothills of the Blue Ridge Mountains, Wytheville is known as "The Hub of Southwest Virginia" and "the Crossroads of the Blue Ridge".

Due to its elevation, the climate of Wytheville is either classified as mountain temperate or humid continental (Köppen Cfb or Dfb, respectively), and the town straddles the border between USDA Plant Hardiness Zones 6B and 7A. Summers are warm and humid, although significantly cooler than low-elevation places within the state, with only 4.6 days of 90 °F (32 °C)+ highs annually, and winters are generally cool to cold with occasional intervening warm periods and 11 nights of sub-10 °F (−12 °C) lows. Monthly mean temperatures range from 30.7 °F (−0.7 °C) in January to 70.4 °F (21.3 °C) in July. Snowfall averages 20.5 inches (52 cm) per season and generally occurs from December to March.

There were 3,504 households out of which 22.9% had children under the age of 18 living with them, 43.4% were married couples living together, 13.6% had a female householder with no husband present, and 39.7% were non-families. 36.2% of all households were made up of individuals and 16.3% had someone living alone who was 65 years of age or older. The average household size was 2.11 and the average family size was 2.72. 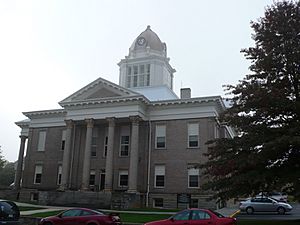 The courthouse in Wytheville, Virginia.

All content from Kiddle encyclopedia articles (including the article images and facts) can be freely used under Attribution-ShareAlike license, unless stated otherwise. Cite this article:
Wytheville, Virginia Facts for Kids. Kiddle Encyclopedia.