Her husband had suffered a long illness. There were many things which the President was needed to do which he could not do. She helped him. Because of this, some people had called her "the Secret President" and "the first woman to run the government".

Wilson was born in Wytheville, Virginia. Her parents were Sallie White and Judge William Holcombe Bolling. She was their seventh child, out of the total eleven children. Through her grandmother, she was a direct descendant of Pocahontas.

When she was 15 years old, she attended Martha Washington College to study music. She attended the second year at a smaller school in Richmond, Virginia.

Once when she was visiting her married sister in Washington, DC, Edith met Norman Galt. Norman Galt was a rich jeweler. She married him in 1896. For 12 years, she lived a good life in Washington D. C. But, she also faced some tragedies. In 1903, she gave birth to a son. The child only lived for a few days. The problem birth made her unable to have any more children. In 1908, her husband died. Edith Galt picked a manager to run the family’s jewelry business. The business continued to earn money. 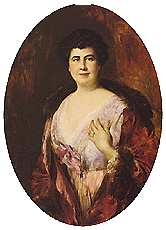 Mrs. Wilson had all the qualifications to act as the First Lady. She began her role as the First lady. During this time, World War I started. This limited the social activities at the White House. In 1917, the United States also joined the war. Mrs. Wilson started helping her husband who was under a lot of pressure because of the war. She also went with him to Europe during the process of peace.

President Wilson returned from Europe. He spent much of his time trying to get the Senate’s approval for the peace treaty. He was also trying to get approval for an agreement to create the League of Nations. In the meantime, his health was getting bad. In September 1919, he suffered a stroke. He became partially paralyzed. Edith Wilson always stayed with him. She took over many common duties of the government and helped her husband in many official matters. At the same time, she sent many other official matters to the heads of departments or allowed them to remain undone.

She also wrote a book. The name of the book is My Memoir. Its year of publication is 1939. In this book, she said that her husband’s doctors had asked her to take up many responsibilities of her husband. Many historians do not agree with her views. Phyllis Levin, a historian had described her as "a woman of narrow views and formidable determination". He blamed her for many failures of the policies of the United States after the First World War.

In 1921, the Wilson couple retired to live in Washington. After three years her husband, Woodrow Wilson, died. She continued to live in Washington. People liked her, and she became a respected figure in the high society of the capital. Some people say that she liked and admired younger men. She lived a long life and lived to see President John F. Kennedy's inaugural parade. She died on December 28, 1961, the 105th anniversary of her second husband's birth. At the time of her death, she was 89 years. This made her the third longest-lived First Lady after Bess Truman and Lady Bird Johnson, respectively.

All content from Kiddle encyclopedia articles (including the article images and facts) can be freely used under Attribution-ShareAlike license, unless stated otherwise. Cite this article:
Edith Bolling Wilson Facts for Kids. Kiddle Encyclopedia.