Wythe County is a county located in the southwestern part of the U.S. state of Virginia. As of the 2010 census, the population was 29,235. Its county seat is Wytheville.

Wythe County was formed from Montgomery County in 1790. It was named after George Wythe, the first Virginian signer of the Declaration of Independence. During the Civil War the Battle of Cove Mountain was fought in the county.

Prior to Wythe County's creation, what is now the Wythe County community of Austinville served as the county seat for Fincastle County, an extinct Virginia county whose borders stretched from Roanoke, Virginia, to the Mississippi River – a county roughly the size of half the State of Texas.

Wythe County's Austinville community, which was founded by Stephen and his brother Moses Austin, father of the famous Stephen F. Austin. In the 1790s the Austins took over the mines that produced lead and zinc; the town was named for the Austin surname, and not for any one particular Austin of the brothers who bore that surname. Lead was mined and shipped throughout the fledgling country; lead shot was also produced. Located near Fosters Falls, Jackson Ferry Shot Tower still stands as a testament to the citizens of Wythe County. Lead was hoisted to the top of the tower using block and tackle and oxen. The lead was melted in a retort and then poured through a sieve at the top of the tower. The droplets of molten lead would become round during the 150-foot descent. The shot would collect in a kettle of water and slave laborers would enter through a 110-foot access tunnel located near the bank of the New River to retrieve the shot from the kettle.

The lead mines closed in 1982 due to new United States Environmental Protection Agency standards and the lack of a market for lead. The mines have since filled with water; the main shaft extended in excess of 1100 feet straight down.

Another notable area within the county is the unincorporated community of Fort Chiswell - named for a French and Indian War era fort. The fort and its surrounding buildings served as the county seat until the incorporated town of Wytheville was established approximately 10 miles to the west. The fort fell into disrepair and its ruins were covered over when the intersection of I-77 and I-81 was constructed in the 1970s. A pyramid marker now stands in the approximate location of the former fort. The community was named for Colonel John Chiswell who helped establish the lead mines (1757) prior to the Austin's purchase.

Wythe County's location, at the confluence of I-81 and I-77 which is, incidentally, a wrong-way concurrency, has led to its growth for industry and tourism. Recently Gatorade and Pepsi manufacturing facilities have located here, primarily due to the ease of access and central location along the Eastern seabord. There are a variety of travel-related businesses including several hundred hotel rooms, several truck stops, and restaurants located in the county. Tourism takes a variety of different forms in Wythe County. There are numerous opportunities for those that enjoy outdoor activities including a variety of trails, campgrounds, and parks in the area. Its first winery opened in 2006 and a second opened in 2007. A dinner theatre is located in the county seat, Wytheville. 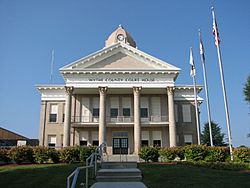 According to the U.S. Census Bureau, the county has a total area of 465 square miles (1,200 km2), of which, 462 square miles (1,200 km2) of it is land and 2.8 square miles (7.3 km2) (0.6%) is water. The county is intersected by the New River. The land is mostly an elevated plateau, lying between Iron Mountain on the south and Walker's Mountain on the northwest. The soil is generally fertile. Iron ore, lead, bituminous coal, limestone, and gypsum are very abundant, and there are traces of silver found in the lead mines.

All content from Kiddle encyclopedia articles (including the article images and facts) can be freely used under Attribution-ShareAlike license, unless stated otherwise. Cite this article:
Wythe County, Virginia Facts for Kids. Kiddle Encyclopedia.